A £180,000 refit of Jamie Keshwara’s Nisa Deepdale store in March 2017 saw sales leap 13% last year. And business continues to soar as summer tourists contribute to a 15% sales increase this year 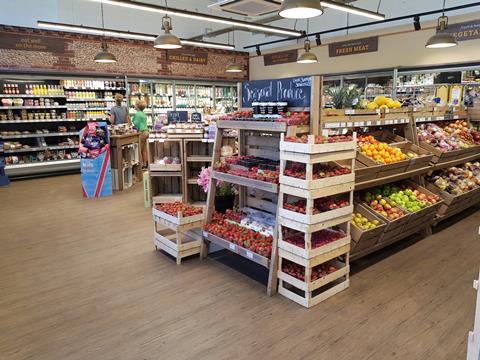 The sun is beating down during C-Store’s visit to Nisa Deepdale and it truly is boom time for the Norfolk store, which is located next door to a campsite.

There’s a happy bustle of customers as people meander around the store, picking up a mix of daily essentials and local delights. “In the summer we have the luxury of knowing that most products will sell,” explains store manager Ruby Rands.

But the story is not altogether wall-to-wall sunshine. “We make a loss a lot of the year - from mid-October to just before Easter (except for Christmas and New Year),” says Jamie Keshwara, who co-owns four c-stores with brother Anish. “When our sales are lowest, 90% of the customers are local residents and turnover is £15,000 a week. In the summer, our peak is £60,000 a week with one-third local and two-thirds seasonal trade.”

Customer base: Residents in low season; residents and holidaymakers in high season

It isn’t just the campers keeping the till ringing over the summer - there are 5,359 second homes in North Norfolk, the highest concentration in the East of England (National Housing Federation’s East of England Home Truths 2017/18 housing report). Of course, the extra custom is welcome, but it comes with its own challenges.

“Finding three times the amount of staff hours over the summer has been difficult,” says Jamie, noting that the best candidates are uni students only around for the holidays.

“We post ads for our Peterborough stores online through Indeed and we’ll get 100 applicants; here we might get three. We spend more on advertising jobs than we do on marketing the store.”

Acknowledging that holidaymakers are central to the store’s success, Jamie was keen to appeal to their willingness to pay a premium for local and regional products when it came to refitting the store last year.

He added a personal touch by creating bespoke category backboards. “I really wanted to create the look of the Norfolk flint,” says Jamie. “Originally, I wanted actual stone, but it would have been really heavy, so Ruby and I took photos of Norfolk flint walls and showed them to a sign company.” He reports that the result is so popular that customers have been asking where they could buy the wallpaper.

The store now features more natural light thanks to the original ceiling being removed and suspended lighting adding a modern, industrial edge. “Before, the windows of the building were blocked by the ceiling so there wasn’t much light and the shelving was high so there was only about two feet of window left,” says Ruby. “It’s still the same size, but the store seemed much smaller before.”

The refit has also allowed for the introduction of premium wines, craft ales and a gluten-free fixture. “The ranging advice on wine is normally done by brand. We invited a wine supplier to come out and say what grapes we were missing,” says Jamie, who has worked closely with Adnams and Inverarity Morton to expand his wine and beer offering.

“Whereas before we only had one malbec, now we have seven,” he says. Alcohol chillers have increased from 2.5 metres to 7.5 metres, meaning that all white and rosé wines and beers are chilled, he adds.

And stocking the right products for his affluent customers means Jamie can afford to maintain prices. “Profitability here is really good,” says Jamie. “The previous owner didn’t premium price the store at all. Local produce margins are in the high 20s.”

Customers certainly don’t seem to be put off, with basket spend at about £13.

Not everyone is happy with the changes, though. “Some people made comments that we were catering for holidaymakers rather than local people,” says Jamie. “But the shop wouldn’t be here without the holidaymakers. We didn’t reduce the existing range, we just expanded it.”

Thankfully, some locals are more appreciative of Jamie’s efforts. Jennifer Lyster, who lives over the road with her 104-year-old mother, is in the store daily and loves the store’s facelift. “They get a lot of interesting things in here,” she says. “The bread is wonderful, and the strawberries, too.” She adds that Jamie is always keen to please. “If things aren’t right I tell him - he does try very hard!”

He certainly does, Jennifer.