Heart of the community

On 4 July, Alan Kasch celebrated 40 years in charge of Costcutter Fernhill Heath in Worcestershire but he says nothing prepared him for 2020 when the first national lockdown hit. 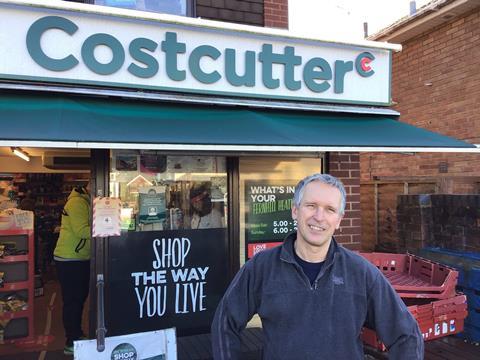 He explains that the first thing he did was make sure his customers were reassured that they wouldn’t go without.

“When Covid-19 first struck, I could see straight away that staff were worried because nobody knew what was going on or how easy it was to catch it. We had a local chap make us some plastic screens and another supplier got us masks, all within a week.”

“Customers were scared to go out and that made it a struggle for some, especially those unable to order online. We had to step up so we made an appeal within the community for delivery drivers and within 30 minutes of posting, we had a list of 60 names willing to help out and deliver these groceries to others.”

Alan says this outreach wasn’t above and beyond the call of duty but rather he believes that it was just repaying his customers for their support over the previous years. “I said to my staff that we need to give back to these people, what they’ve given us for 40 years. They’ve stepped up for us by supporting our business and we needed to return the favour as they needed us.”

He says that this is normal for a community-centric store. “When you’re a village shop, you see the people who come into your store far more often than you would some relatives and they become your friends as well as your customers. You learn about their lives - what they’re doing, if they’ve had an operation or even their sex lives. You’re part of their lives and vice versa so you have to do whatever you can to help.”

It’s little wonder why Alan is so keen to help those in his community, since he’s been part of it since he was a child. “I lived in the village since I was ten when my family moved here. I used to deliver the papers for the previous owners who were all about doing things for people in the village. When I took over the shop 40 years ago, I wanted to do the same thing.”

Alan estimates that he worked 100 hours a week on average during the height of lockdown but even now he says he does around 80 hours. “I’m in the store all the time, I feel I have to be right now but it has eased off since last year. I enjoy it though, you have to enjoy it to do what we do.”

We work with the parish council to find out what needs to be done in the village, be it a charity or an individual, and we help whatever we can.

Of course he wasn’t doing it all alone - Alan credits his staff for their hard work during the pandemic, praising the tremendous effort they put in to help the community. “They put in so much work, they couldn’t do enough and the shop wouldn’t be able to function without them.”

Alan’s store is so vital to the community that his major competition is pulling out after nearly seven years because they were “losing too much money”. He says that the competition wasn’t able to offer the same level of service that his store does. “It wasn’t an independent retailer so there wasn’t the same emotional investment. Staff kept changing over and it just wasn’t right for the village.”

When availability from suppliers was poor, Alan hit the cash and carry to make sure that he had everything he needed for his customers. “I was outside depots at 7am every morning for three months, it was tough but we had to do whatever we could for the customers. It needed to be done.

During lockdown, deliveries from Alan’s store grew to a couple of hundred which involved the essentials while he had 30 households depending on him for all of their groceries.

The village store has been at the heart of the Fernhill Heath community for over 100 years and with Alan and his team at the helm, its future seems secure.

Alan and his team spend a lot of time and effort helping others in the community – just some of their endeavours include: dressing up and being part of the Christmas and Easter seasonal village parades; donating and cooking food and drink for local events – including the summer fayre; working with local primary school to support fundraising efforts; donating free pack lunches to the village school for children whose parents were key workers; working with local volunteers to help deliver up to 100 food deliveries, 23 times a week to vulnerable residents; donating raffle prizes and cash donations to local causes including the village school, retirement homes and events committees; helping fundraise for a specialist wheelchair for a young boy in the village – as well as also delivering grocery to his family who are having to isolate due to him currently receiving hospital treatment and working with local suppliers/ producers to support the local trade.