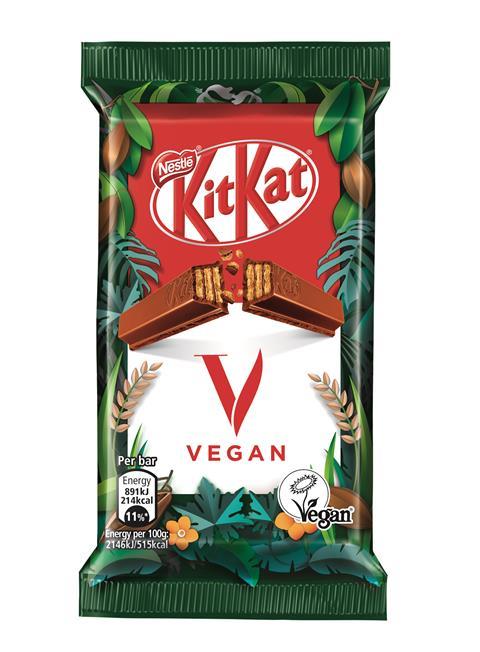 The four finger KitKat V, which hits shelves later this year, features crispy wafer fingers covered with chocolate blended with plant-based ingredients. Its vegan status is clearly signposted on the front of the pack, which features green plant imagery and the Vegan Society logo.

KitKat V was developed by chocolatiers and food scientists in Nestlé’s Research and Development centre in York, the original home of KitKat.

Alex Gonnella, marketing director for Nestlé Confectionery said: “We have seen an incredible response to our vegan friendly Fruit Pastilles since their launch last year, so we know how much people want to enjoy alternative versions of their favourite treats.

“The most common request we see on social media is for a vegan KitKat, so we’re delighted to be able to make that wish come true.”

The company claims that the number of vegans in Great Britain quadrupled to 600,000 between 2014 and 2019. “There is a quiet food revolution underway that is changing how people eat,” said Gonnella. “We want to be at the forefront of that, championing the discovery of plant-based food and beverages. What better proof of that than offering a plant-based version of one of our oldest and most famous brands?”

Like the rest of the KitKat range, it is made from 100% sustainable cocoa, sourced through the Nestlé Cocoa Plan in conjunction with the Rainforest Alliance.

The announcement follows the release of the new dark and white chocolate KitKat Zebra, which is available now.