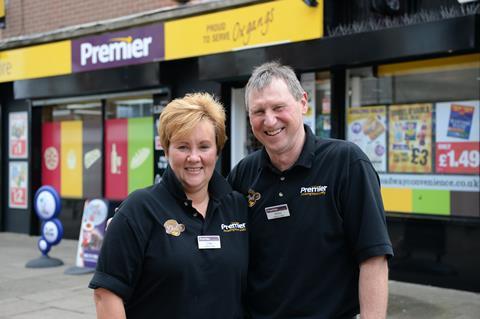 With a new food-to-go counter, a revamped spirits section with the latest in LED lighting, and an extended fresh produce and promotional range that covers both value and premium lines, the 1,600sq ft Premier Broadway Convenience in Edinburgh has it all covered. Which is a good thing as a new Aldi store is opening just a few doors away at the beginning of next year. Owners Dennis and Linda Williams are confident the changes will enable them to see off the competition from the discounter, helped by the store’s 30-year trading history and their ongoing commitment to the local community. C-Store takes a tour.

The store’s food-to-go counter has been open just over a month and cost nearly £10,000. The Premier Deli unit features an oven, microwave, griddle and panini-maker, as well as a series of display cases.

Alongside the deli sits a new Espresso Essential coffee machine, which offers customers bean-to-cup coffee for £1. As part of a new loyalty scheme, regular customers will receive a coffee fob allowing them to get their coffee for just 79p.

On-trend items such as protein bars and shakes are new to the store, and are one of the first things customers see when they enter.

Local goods are stocked where possible, such as fresh fruits from Fife, complemented by a strong own-label product range.

Pre-packed fresh produce is presented in large chiller units, with those items on promotion stocked in an open-top chiller in the centre of the aisle for easy access.

The store runs an incentive scheme for schoolchildren whereby if they buy a piece of fruit from Monday to Thursday, they get a piece free on Friday.

Linda and Dennis are currently working with suppliers to organise tastings and sampling days, to tie in with events such as Bonfire Night and Christmas.

“The store is run by and for the local community. Without their support, we wouldn’t have been able to do half the number of things we have done in the store,” says Dennis.

A redesigned offers leaflet has been introduced to accompany the store’s greater focus on Mega Deals and bigger emphasis on value throughout the store.

The number of Mega Deal promotions has increased from four to six dedicated displays at the end of aisles, and this could rise to eight over the next few months.

The store also benefits from a range of regional-specific offers, supplied by Booker. They cater for local tastes and encourage the local community to buy Scottish Favourites.

Throughout the store is a mix of premium and value Scottish Favourites, from Scottish whisky to Golden Wonder multipacks.

Tobacco has been moved from the gantry into drawers underneath the counter, and the space filled with spirits. This has allowed Linda and Dennis to double the amount of spirits they stock. The area is illuminated with modern LED lighting.

Both razors and batteries have moved from behind the till on to the shopfloor. “As a result, battery sales have increased 40% and we haven’t see any increase in shoplifting,” reports Linda.

OTC medicine has been given its own dedicated area following the closure of the chemist in the parade. Sales are climbing as a result.

The couple have also added e-cigs at the till point.