When a ram raid left their store unsafe to work in, the team at Dedham Co-op set up shop in a barn, braving a fierce winter and a scorching summer to serve customers while the store was rebuilt and refitted 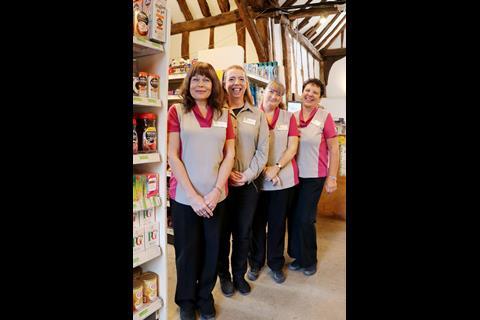 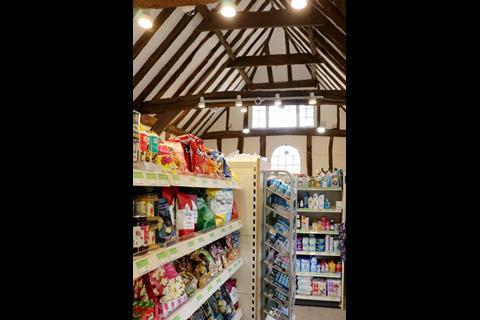 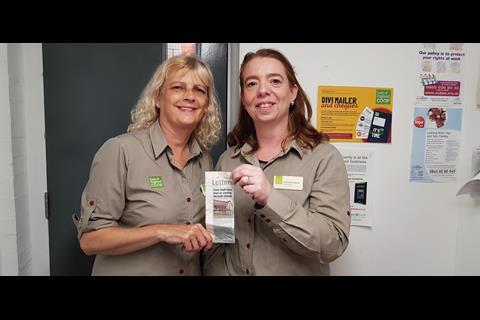 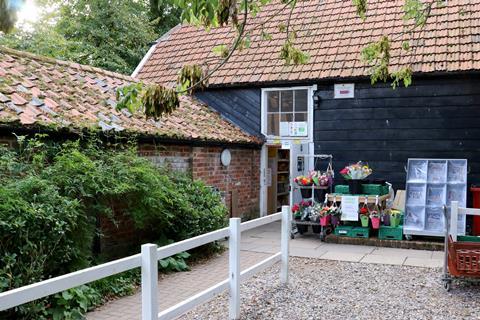 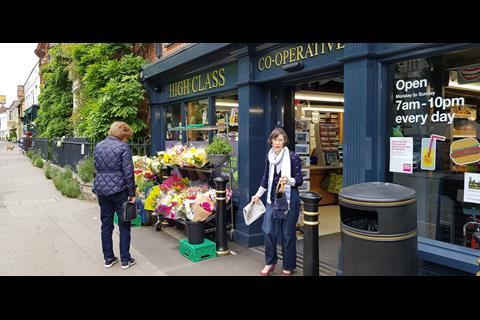 The store reopened almost nine months after the ram raid, with a host of improved security features 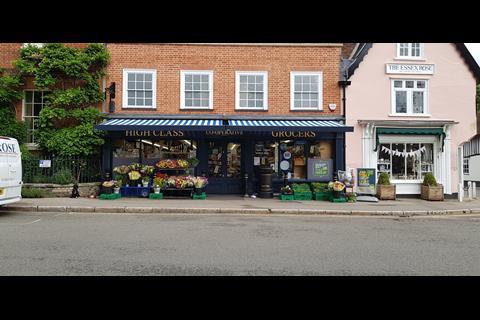 A steel frame now protects the outside of the store, while anti-ram raid bollards have been reinforced with steel 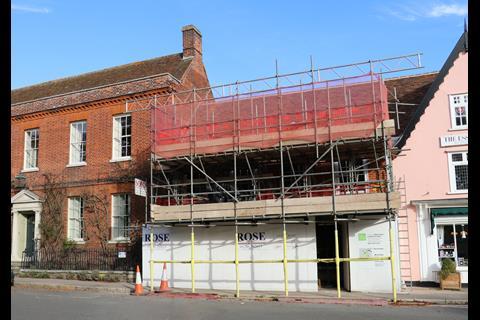 The work Christmas meal is the highlight of the year for many employees, but the team at Co-op Dedham in Essex sat around the table in a state of shock, unable to celebrate having heard that their beautiful village store had been ram-raided just that morning.

The East of England (EoE) Co-op’s Secure Response team, which monitors the shop’s CCTV, alerted the police as soon as the store came under attack at 2.20am on Sunday 10 December 2017. A black Toyota Hilux had rammed the shopfront five times before gaining access to the high street store, but the would-be robbers failed to steal the store’s ATM and were forced to leave empty-handed.

The attackers were in and out in minutes, but the store’s reconstruction and repair work would take months. Lee Hammond, head of Co-op Secure Response, explains that the store, which is a listed building, was on the verge of collapse.

“They’d taken out a support beam which was holding up the shopfront, and the wall was starting to bow out,” Lee explains.

He acted fast to prevent further damage. “We bought in a digger to hold the shopfront up,” he says. “Without that, we’d have had the whole shop collapse and the building next door would have been damaged, too.”

It was clear that the store couldn’t operate in its current state but, eager to keep the business running and support the local community, the EoE Co-op head office sprang into action, making phone calls to local councillors in a bid to find a temporary venue.

A mobile shop was set up outside the ram-raided store with the bare essentials and the parish council agreed that the Co-op could set up a temporary shop in Dedham’s community centre, Duchy Barn. “We were trading in the barn the week before Christmas with a very reduced range,” says store manager Diane.

The building was located away from the high street, down a country lane, and the arrival of snow made it even trickier to reach. With delivery vehicles unable to gain direct access to the barn, staff were forced to brave the elements to meet the delivery vans.

“We were out in the snow in our wellies,” recalls Diane. “All the deliveries were coming in on vans and then we had to walk them down the lane to the barn.”

Customers also needed extra help. “Not being on the high street, people found it harder to walk down the lane after they had bought their shopping, so we’d often carry their bags for them,” says team leader Amanda.

“It was a bit of a war effort – the chips were down,” says Hammond.

Despite tough conditions, the staff did their best to serve customers and keep the makeshift shelves full. “Our cigarette stock was in a filing cabinet in alphabetical order, and we had our tea room in the disabled toilet,” says customer service advisor Sharon.

“We also had a back-up fridge in the shed,” adds Amanda.

In order to make the best of a bad situation, head office decided to bring forward a planned refit of the ram-raided store, with a view to re-opening in June. But a surprise discovery meant that this took considerably longer than first thought. “The builders came across some archeological finds [dating back to the 16th century] including a big cauldron meant to keep evil spirits away,” says Hammond. “They think that the store was once a merchant’s.”

While local residents and tourists alike were fascinated to hear about the history of the building, the store’s relaunch was forced back as archaeologists completed their dig.

And for staff working at the barn, conditions didn’t get any more palatable. “We had the reverse of winter conditions in the summer,” says Mark Lewenz, EoE Co-op retail project manager. “It was very hot and there was no air-con, and there was a wasps’ nest in the store.”

Sourcing enough power to run the store was another issue to contend with. “We were right at the max of the electric use, so we couldn’t plug any fans in when it was hot as the power would go out,” says customer service advisor James. “And the wifi [which was borrowed from a neighbouring cottage] went down every five minutes.”

This created huge amounts of work for the team, as well as being yet another inconvenience to customers. “We had only one till and we had to write everything down and input it manually when it broke down,” explains Diane.

Unsurprisingly, customer numbers dwindled as people turned elsewhere for their day-to-day needs. Nevertheless, the store still provided an invaluable service to the village’s elderly residents. One regular customer even sent a letter to the local paper, praising staff for their stoicism. “We just adapted,” says Sharon modestly. “The elderly customers were really appreciative.”

Meanwhile, Hammond oversaw the safety and security of staff at the temporary store. “We had remote technology where staff could carry panic buttons [whilst working in the barn] which would send out alerts when pressed,” he says.

He also worked with the police to ensure they had as much information as possible to help them track down the criminals who had created the havoc in the first place. “The police have made 14-17 arrests among the gang who committed the ram raid, but the gang is still operating across England and Europe,” he says.

Hammond then concentrated on beefing up security at the newly-refurbished store, which was finally re-opened in October. This was no mean feat because, as a listed building, there were a great number of restrictions surrounding what could be done.

Looking at the new exterior, with its traditional signage sympathetic to the local area, and market-style striped awning, it might seem that the store’s upgrade is largely superficial, but there’s more to it than meets the eye. “You have to make it aesthetic first,” says Hammond. “This is a rural community store, so it needs to be that first. You can do security, but you need to fit in with how a business runs.”

That’s not to say they haven’t gone to considerable lengths to ensure that the store is better protected against a repeat attack. “There’s a steel frame boxed into the frame of the store entrance,” Hammond says.

The CCTV has been upgraded as well, although the external cameras are black so as to blend in with the shop front. Door vinyls warn would-be criminals that the store is under 24/7 surveillance and that staff do not have access to the safe at night.

The five black posts running along the shopfront have gold paintwork to give them a decorative edge, but they are also much sturdier than before. “We’ve increased the strength of the bollards. Before, they were concrete, but now they are steel,” says Hammond.

He has also relocated the ATM, which now sits at the very back of the shop. Removing it wasn’t an option. “You shouldn’t give in to crime,” says Hammond. “If you remove an ATM it’s to the detriment of the community.

“Cashzone has made considerable upgrades with the security. The machine used to have anchor chains bolted to the ground, but it’s possible for criminals to cut these with an angle grinder. The ATM now has anti-cut weights, which can’t be cut off. They doubled the weight of the machine to about 400kg. It also has a tracking device fitted and there’s an alarm which goes off if it is moved.”

Diane claims that it is a vital service for the community. “Customers were surprised and pleased that we had the ATM up and running,” she says. “The post office in the pharmacy next door is closing, so our ATM will be relied upon even more.”

The refitted store also boasts several new features. “We’ve increased the number of local products and the look and feel of the store,” says Lewenz. “We now stock Essex-grown asparagus, raspberries, strawberries and cucumbers, and we have bread supplied from local Peacocks bakery.

“Co-op baked goods are displayed in black baskets to tie in with the new silver shelving, which was previously cream, and there’s LED lighting, which is more energy efficient.”

There’s also a new lottery terminal and a slush machine, which the team are hopeful will encourage customers to return to the store.

Says Lewenz: “We’re building back the business after suffering some quite substantial losses, and our customers and staff are really pleased with the changes that we’ve made in store.”

It hasn’t been an easy ride, but the staff at Co-op Dedham have shown that with dogged determination and a can-do attitude, they can triumph over adversity.