Thrifty’s: The price is right

In the north west of England, independent retail group Thrifty’s is expanding quickly on the back of a community-focused approach and a commitment to offering sensational value in store 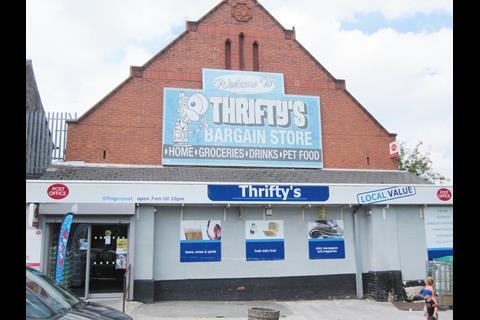 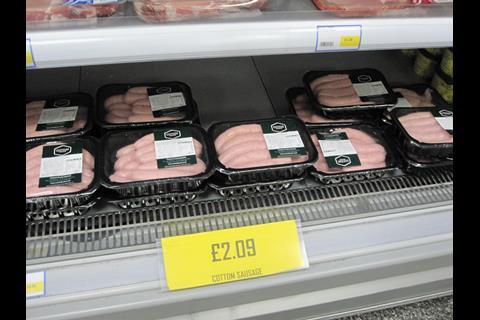 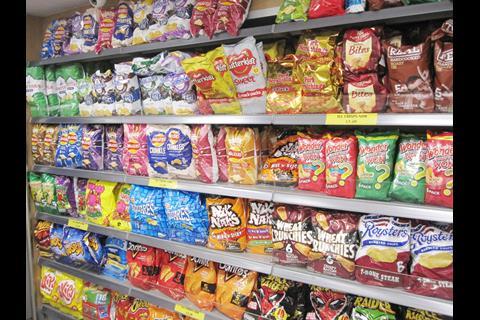 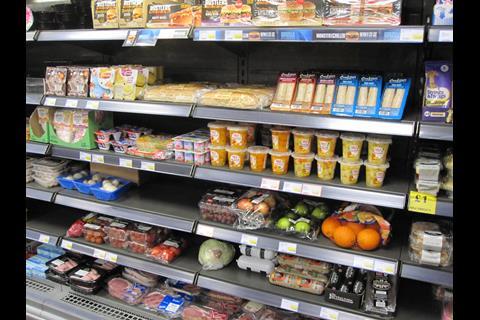 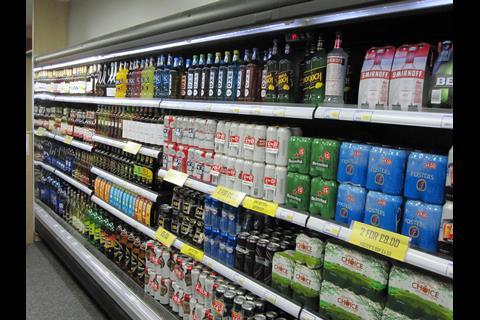 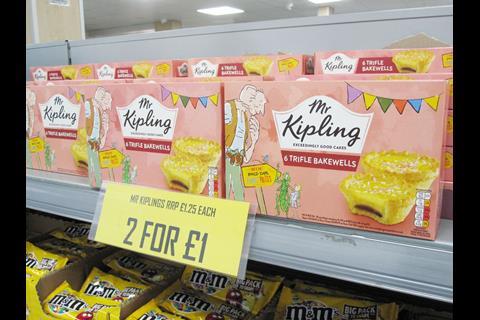 Pricing is kept clear and simple at Thrifty’s, where POS is deliberately no frills. All crisps and snacks multipacks retail at £1.20 on this fixture, regardless of brand 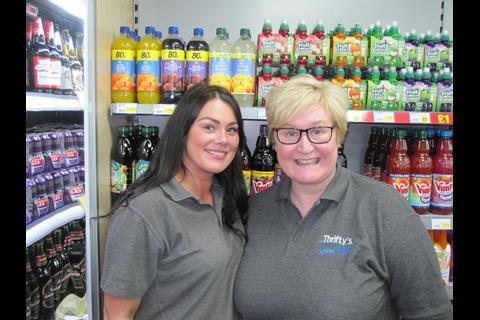 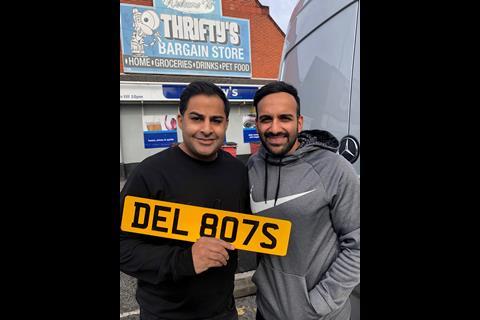 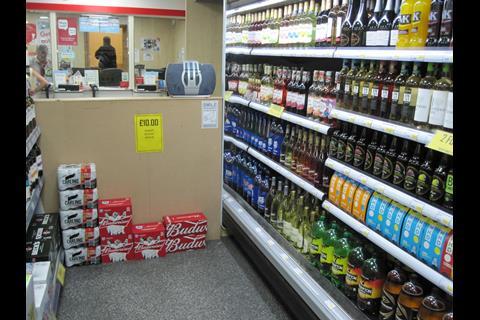 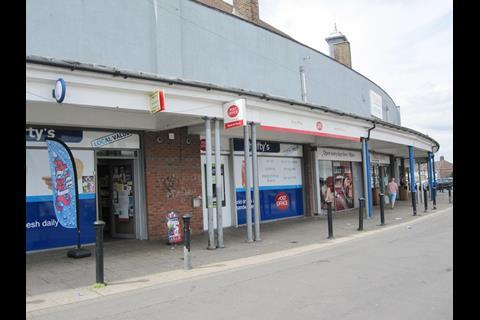 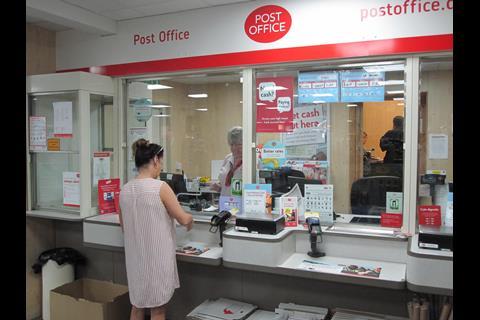 Offering a post office acts as a footfall driver, with shoppers tempted to spend in-store once they see the keen prices 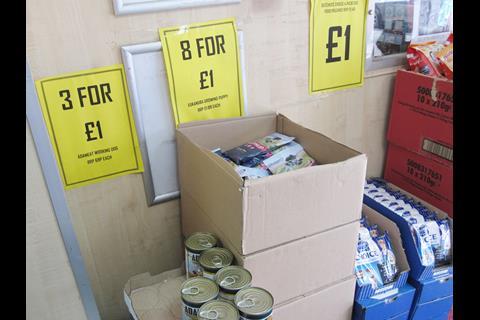 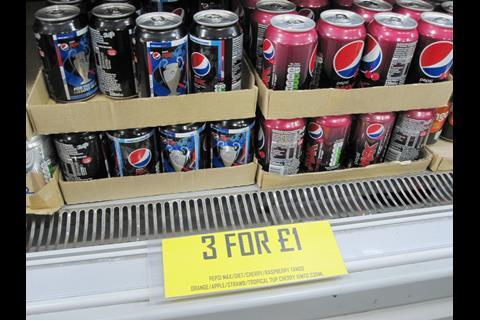 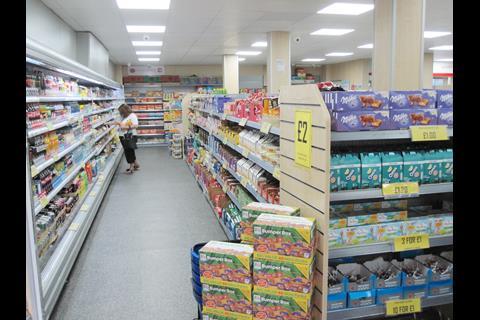 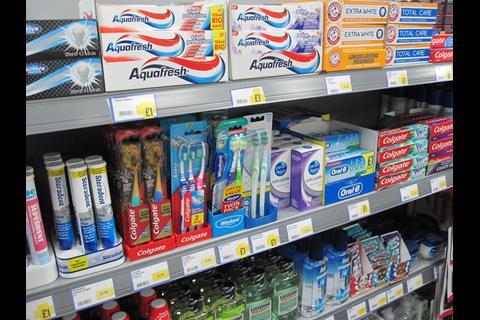 In retail, the name above the door counts for a lot. So if you’re going to trade under a name like Thrifty’s, you have to make sure you deliver on your implied promise of low prices.

Fortunately for shoppers in St Helens and the surrounding area of Merseyside, low prices are always on the mind of retailers Navin Soni, also known as Micky, and his business partner Ricky Sharma (“Micky and Ricky”). There is more than one way to do convenience retailing, and at Thrifty’s you won’t find much in the way of expensive fixtures and fittings. Here stock is piled high and sold cheap. Very cheap, actually.

Cans of pet food with an rrp of 69p can be purchased three for £1; boxes of six Mr Kipling cakes are available at two for £1; while Cadbury Choc Rolls are two for £1.20. Prices are low, but they are also kept simple. A whole wall of crisps and snacks multipacks are all priced at £1.20, regardless of brand. Similarly, a variety of toothpastes and brushes are all priced at £1 to keep things clear and easy for shoppers.

“In convenience, conventional wisdom is to pay a premium. But here we are, below the supermarkets and even below the discounters,” says Navin.

So how can they retail at such sensational prices? Navin’s answer: “We buy well. We negotiate hard, but then take the entire load that is available and we pay to terms. We go to Bestway, Booker, direct to manufacturers, grey market, stock clearances, even other retail sometimes. But not many operations buy the volumes that we do.”

Navin and Ricky are, unapologetically, cherry pickers if they see a good deal, renting warehouse space if they need extra storage capacity for the huge quantities involved. Navin recalls how he once bought 90 pallets of dog food in one go. “It took 18 months to sell through, but we sold it all!” he laughs.

Evidence of the approach is everywhere you look – stacks of branded lines sit alongside pet food cans with no labels at all.

For Navin, buying and selling is in the blood, starting off when he was a child at school, selling not just sweets but also clothes and other items to classmates. One of his fictional heroes is Del Boy from TV’s Only Fools and Horses – indeed, when he first started to achieve success he celebrated by investing in a silver Sprinter van and the personalised numberplate DEL8O7S.

Initially this success came in the wholesale market, where Navin ran Cheshire Wholesale. “I was supplying retailers, but I was getting frustrated: I didn’t think they were as switched on to the importance of value as they needed to be.”

So in 2010 he bought a store from a former customer, and went on a steep learning curve. Initially he thought that it would serve simply as a discount outlet for the wholesale business, but soon realised this wasn’t going to be sustainable and that a more recognisable convenience offer would be a better approach. Now the business is growing fast, with 11 stores, four in the St Helens area, but with others in Lancashire, Cheshire and Merseyside.

At the Fingerpost store in St Helens, every inch of the 2,400sq ft site is used to communicate value. All the POS material is designed and printed by themselves, and deliberately kept simple.

“No frills is very much part of the offer, but we also need to be able to move quickly,” explains Navin. “Once we’ve bought the stock we need to bang it out fast.”

Looking around the stores, pet food is a particular strength, as is household and other non-food, but the pair are under no illusions that they need to have a credible convenience offer to succeed. So bottles of Coke are on sale at, let’s call it a normal, sensible price. But on the same fixture you can see a permanent ‘three for £1’ deal on cans of other major carbonate brands. There is a big focus on impulse, but often in large packs, multibuys or multipacks. It’s actually quite difficult to find any confectionery singles, but there are plenty of four- and six-packs for a pound.

The chilled offering, as a rule, is kept compact. Generally the offering is restricted to four bays with a simple range suited to the local clientele. Wastage, says Navin, is virtually zero.

“You look at the chilled fixture and think we could probably enhance it. But we tried some new lines here and there and they went out of date, so we now stick to what we know will sell locally. We know the area and we know the people, so we stick to the right products for around here.”

Local sausages, for example, go down a storm – selling 300 packets a week in one of the busier shops.

The team tried food to go as a ‘discount deli’ offer, but also discontinued this experiment. “It’s difficult to manage,” says Navin. “You really need someone in store to do it well, you have got to take it seriously.”

Moving with the times

Elsewhere, the group is constantly adapting to the requirements of convenience retailing, and like many are finding that traditional grocery sales are falling away. “We used to sell all kinds of tins and packets, but there’s no significant volume now,” says Navin. “It’s all gone to Aldi and Lidl. We used to buy stuff like tins of stewed steak by the palletload, but we hardly shift any at all now.”

On standard lines, the tactic is to go for everyday low pricing (EDLP) all year round. On occasions, products retail for less than the pricemarks, but they usually stick to these, and Navin thinks they are good for business. “Consumers do trust them. And, as we’ve increased the number of stores, we’ve needed to simplify the operating model and pricemarks help us do this.”

In beer and cider, sales are minimum four-packs (Navin believes licensing authorities prefer this, and it is also easier to control theft this way) – with no super-strength lines. The problem with being a no-frills retailer in an economically-challenged region is that it can occasionally attract the wrong sort of “customer”, so at Fingerpost the alcohol aisle is blocked off at one end so visitors to the section are forced to walk directly in front of the counter in order to exit the store.

Tobacco is a relatively new thing for the business. “We never used to sell tobacco, but if you are going to be a c-store you need to have it,” argues Navin. Even so, it accounts for less than 20% of cash sales in the business, and the pair are exploring appropriate vaping options.

Post offices are proving successful, and Navin reckons that Thrifty’s has managed to save and retain the offices in at least seven locations where they would otherwise have disappeared. “It does drive footfall, and then when people come to our shops they see the value we are offering,” he explains.

The in-store atmosphere is also a key part of the offer, explains Navin.

“Staff are encouraged to bring their personality to work. We are always looking to have a laugh and a joke with the customers, and to choose the right staff to create the right atmosphere.”

The community spirit is palpable when put to the test. When a popular staff member passed away recently, customers had collected £500 for the family within two hours.

“By offering value, we are rewarding our customers for shopping locally,” explains Navin. “This is not a great area, economically speaking, there is a fair bit of unemployment. But because we are a local business, they treat us well, and many people travel from miles away just to shop here.”

Navin prefers to keep the group’s turnover a business secret, but weekly sales at the best store are impressive, and the average takings across the estate are very healthy. Competition is a fact of life, and it doesn’t daunt Thrifty’s: two stores, including one at Huyton, trade next door to a Tesco Express.

“We aren’t too worried,” says Navin. “Our pet care and our household ranges are better for one thing, and we know the customers, and banter with them.”

And the Thrifty’s empire is expanding quickly, with five new sites opened in the past 12 months. A former Bargain Booze outlet in Blackburn has been acquired and is being rebranded, and another four sites are at various stages of planning and development, including one at a large former pub, which Navin hopes to convert into three retail units and have complementary tenants alongside a new Thrifty’s.

Building up the retail estate will in turn enable the team to create a renewed focus on wholesale. As such it is trialling a supply deal with a few independent retailers, where Thrifty’s does the buying for them.

“Down the line we might look at a full franchise scheme,” reveals Navin. “When we first started we had no epos, no stock control as such. We learned quickly how important this was. Now we are in a position to help other retailers with buying and the supply chain, but also with finance and banking and things like staff training.

“We are trying to create something that stands up to the multiples, where value and convenience go hand in hand. We are the underdogs, but our success shows that we can help other retailers, too.”