The Snooty Fox café and convenience business has come a long way from its humble sandwich shop beginning. 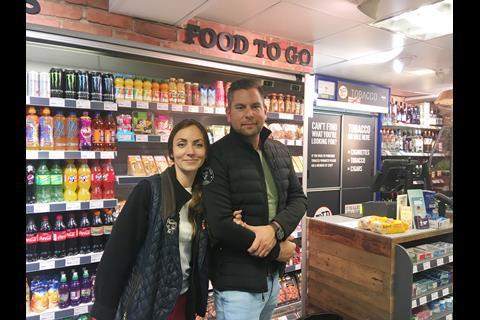 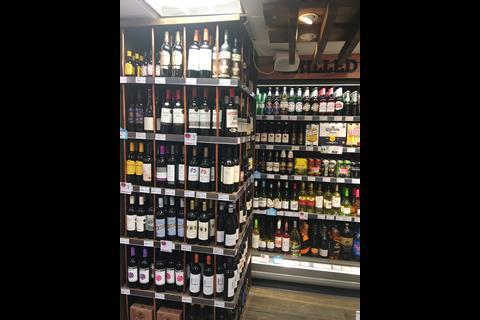 With no other village store within walking distance, the wide range of chilled alcohol goes down particularly well 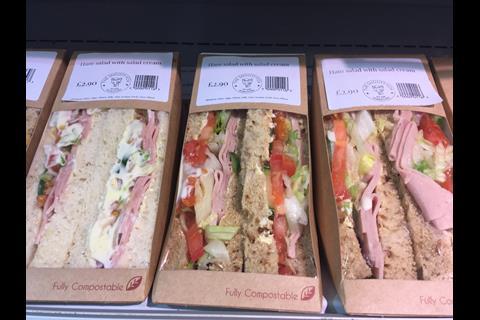 Sandwiches are made in the in-store kitchen by the cafe’s chefs, who also prepare the store’s bakery items 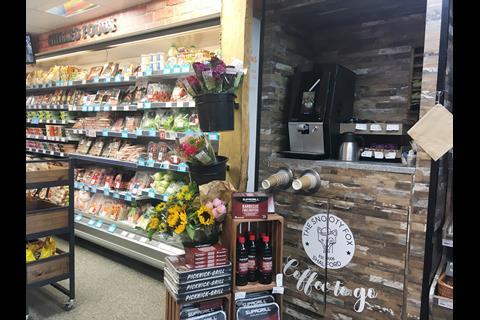 Commuters make a beeline for the bespoke Snooty Fox-branded hot drinks to go, sited near the front of the store 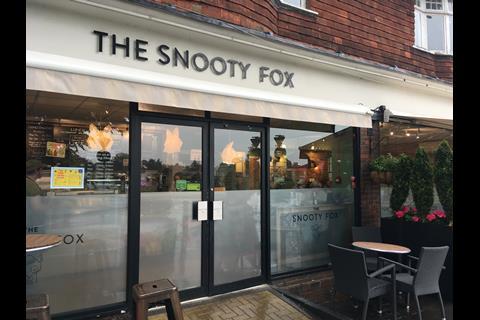 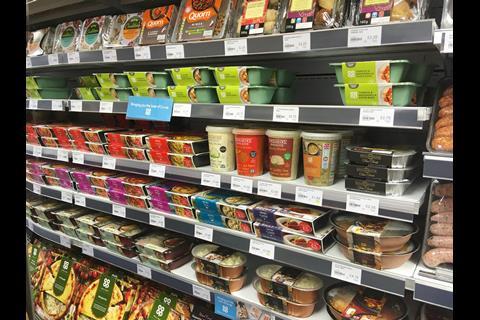 Adding the Co-op own label has been a game changer, the duo explain, with premium ready meals much in demand 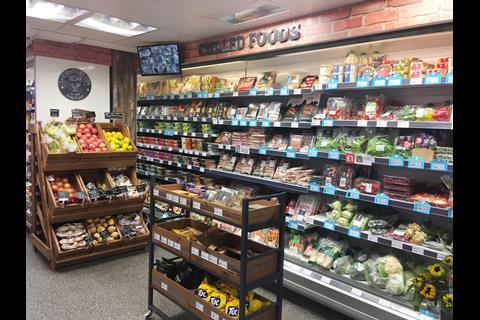 The refit provided the chance to extend the chilled food range, with the result it now accounts for 30% of turnover 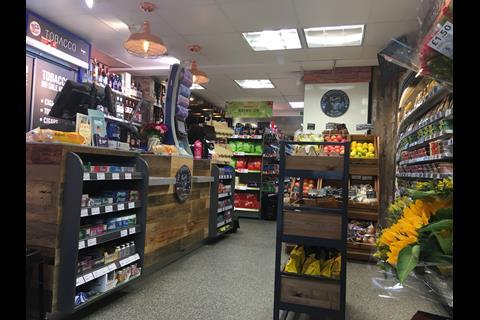 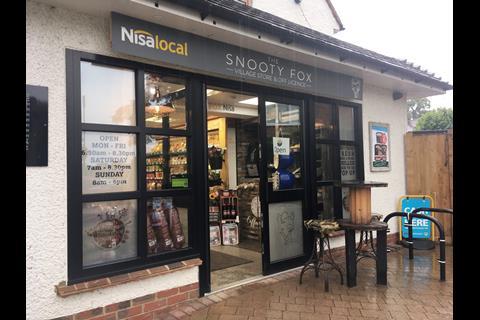 The convenience sector is brimming with inspiring retailers with tales of transformation and triumph. But every now and again at Convenience Store we are lucky enough to meet retailers who have been on a such a long journey, both geographically and figuratively, that anyone hearing their story cannot help but be mightily impressed.

Frankie and Adrienn Ago, owners of The Snooty Fox (Nisa) convenience store and café in the leafy village of Shalford, Surrey, are just such a couple.

In 2004, Frankie arrived in the UK from Hungary with not much more than two bags and a case-load of ambition. Frankie, who comes from a foodservice background, immediately found a job washing dishes in a restaurant.

A few years later he found new work, in what was then a small sandwich bar called The Snooty Fox, in the heart of Shalford village. His duties quickly turned to making the sandwiches themselves and within a short space of time he had taken up many of the sandwich bar’s managerial responsibilities after proving himself to the then owner.

In 2009 when the owner decided to sell the business, Frankie was the man to buy it, and within three years he’d set his sights on a bigger slice of success.

“It was clear that the village had potential and was screaming out for something more. Shalford has a really diverse customer base with lots of young families and elderly people, but there is no grocery store within walking distance and no real heart of the village,” he says.

“We were aware of another premises for sale just a few doors down from the sandwich bar and close to the railway station that we knew would be perfect for a village shop, but it was a tough time as the banks weren’t lending.

“Fortunately for us, a family friend and private investor, who knew the area, offered to support us and we jumped at the chance. He saw the potential and backed us.”

With no first-hand experience of running a convenience store and the pressure to do right by the people of Shalford and his investor, Frankie knew at once that symbol group membership would be the key to business success.

“We spoke to a number of symbol groups and other retailers, but we knew pretty much straight away that Nisa was the right fit,” Frankie says.

Adrienn, who had up until then been working in Hungary, joined Frankie in the UK in 2013, and just a few weeks later and with the help of the team at Nisa, the first incarnation of the 850sq ft Nisa-branded convenience store was created.

Adrienn, who now manages the day-to-day store operations, recalls the steep learning curve she faced. “It was terrifying at first – not only was I new to the UK, but I was taking over the running of a convenience business.

“Looking back now it seems crazy. We couldn’t have done it without Nisa’s support. They held our hands every step of the way, but at the same time they gave us the freedom to put our stamp on the business.”

From day one of opening, the store was exceeding expectations. “Nisa had compiled some reports and trade forecasts based on their insights into the local demographic before opening, but we did better than the best forecast straight away, and by year two we had exceeded our year five forecast,” Adrienn adds.

“Looking back, the success was just incredible.”

In 2013 another opportunity came up for Frankie and Adrienn to relocate the sandwich bar into a much larger vacant premises immediately next door. And so The Snooty Fox café, as it is now known, was born.

“In such a short space of time we had totally transformed the dynamic of the village,” Frankie admits.

“The people were always there, but there was nowhere for them to meet and shop. Now when you look around the store and café, there are new mums, babies, elderly people, dog walkers – it’s fantastic. There’s just this incredible vibe, like we’re all in it together. I guess we all feel so lucky.

“My family had a shop in Hungary and I never thought I wanted to go into retail, but the type of business that we have developed, with the café element added to it, it just doesn’t feel like coming to work.”

And the team of store and café staff clearly share in that feeling. “There’s a great vibe in the business and in my opinion that’s a sign of a good company culture and I do feel that we have that here,” Frankie adds.

“Staff can see that I lead from the bottom up. I’m not afraid to get my hands dirty, in fact I enjoy it. If the team need help washing dishes, I’ll jump in and take over. That’s how I started out and it’s good that staff know that. I think it helps. I’m not just some disconnected business owner, managing operations from my in-home office. I’m hands on.”

By 2018 and after five years of growth, it was time for the convenience store’s first refurbishment and closer range review.

“Although store sales were still growing, that growth had started to slow and we knew we had to shake things up,” Adrienn says.

“We worked really closely with Nisa to re-establish the range and they remerchandised the whole store with our help, as by then we had a really good understanding of our customer base.”

The store front was remodelled and a new dual-branded Nisa Local The Snooty Fox Village Store and Off Licence fascia was added.

Inside the smart black doors, the news and magazines were moved to the rear of the store and the front was redesigned with an increased focus on food to go, giving pride of place to homemade sandwiches and freshly baked loaves, which are all created from scratch in The Snooty Fox café.

“All of the sandwiches are made fresh in the café first thing and are in store by 8am,” Frankie explains.

And in homage to the businesses’ sandwich heritage, The Snooty Fox sarnies remain a thing of beauty, constructed with the freshest bread and generous proportions of homemade fillings. “Feel the weight of that,” Frankie laughs, lifting a hefty ham salad sandwich with an rrp of £2.90. “You won’t find anything like that on the high street.”

A bespoke wood-panelled coffee station also graces the front of the store, offering premium quality Snooty Fox-branded hot drinks to go for a lower price point than those sold at the café, which Adrienn says are particularly popular with morning commuters.

The small store also features an array of custom-made space-saving solutions, such as wood-panelled walls on wheels, which can be moved in and out of position enabling roll cages of stock to be stored out of sight.

Frankie himself designed the industrial-style shelving for the store’s wine range. Featuring wooden shelves supported by copper piping, the striking fixture uses every inch of space, allowing the store to double the size of its wine offer.

The aforementioned promotional mix has also been shaken up, falling from 35% to 25%.

The “game changer”, however, has been the introduction of the Co-op’s own-label range and in particular its premium tier Irresistible range.

“Heritage was good, but it wasn’t quite up to scratch. Our customer base is reasonably affluent and people tend to be prepared to pay a little more for a premium product. That’s why the Co-op range has been such a game changer,” Frankie says.

The refit has also allowed the store to boost its fresh and chilled range. Chilled now accounts for 30% of turnover, with a fair number of locally-sourced products, such as sausages from the local butcher and Scotch eggs from a local chicken farmer, sitting pretty beside Co-op own-brand goods.

“We have 2,500 product lines. We are a top-up shop – we aren’t trying to be everything – but what we are doing, we are doing really well,” Adrienn adds.

And it seems that customers would agree as sales post-refit are tracking at about 10% up year on year.

The close links between the store and café also help to keep margins in check. Wastage is kept low as the café’s chefs are able to use goods close to the end of their shelf life in their café meal options, which range from cooked breakfasts to the famous Snooty’s Burger.

All of the café’s milk is also sourced from the retail side, and the café supplies a significant proportion of the store’s bakery items, most of which are baked from scratch on site.

“It makes perfect sense – we only need one kitchen, one set of chefs and it’s enabled us to save space in the store itself,” Frankie adds.

But Adrienn and Frankie haven’t simply stopped with the provision of a great store and café for the community. They also strive to support the village in a number of different ways, from sponsoring the local cricket team to raising money for a community defibrillator which is housed outside the café.

“We also let the British Heart Foundation run first-aid training courses in the yurt at the back of the café,” Adrienn adds.

The pair have even transformed an area of formerly overgrown land at the side of the store into a community garden, complete with fruit trees and benches for locals to sit and relax (with a freshly prepared Snooty Fox coffee to go and sandwich, ideally.)

“The café and store are more than just places for people to shop and refuel. What we’ve done is to create a hub, a real heart for the community which simply wasn’t there before.”

Hopefully, the pair – who celebrated their UK Naturalisation Ceremony last month – will find some time to sit back and take in their incredible success.

“It’s certainly been a journey,” Adrienn laughs. “It’s still hard to get our heads around it sometimes, but we’re loving every step.”