Mondelez rewards retailer with two £25,000 prizes for his store and chosen charity 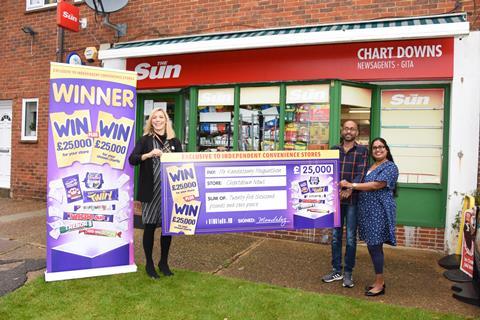 Kandasamy Mugunthan has won £25,000 to spend on his store and a £25,000 charity donation as part of the supplier’s Win-Win competition, which is exclusive to independents.

The retailer, who has owned Chart Downs News in Dorking, Surrey, for just over a year, plans to refurbish his store after his nephew found the winning ticket in a Curly Wurly case when re-stocking shelves.

“It’s amazing to win this prize, and the timing couldn’t be any better,” said Mr Mugunthan.

“We’ve been planning a full refurbishment of the shop since March, but because of Covid-19 we haven’t been able to get it started. This prize will pay for most of that, which is great! We’re now planning to start the refurb in two weeks’ time.” 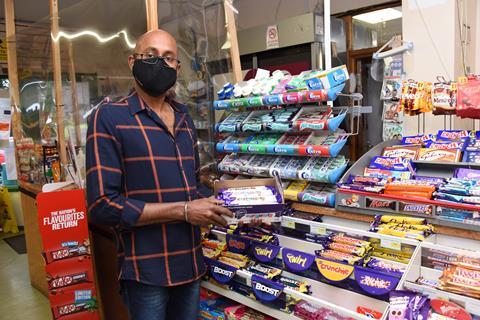 As part of the prize, Mr Mugunthan was able to donate £25,000 to a charity close to his heart. He selected Mannar Welfare Association UK, a charity that provides relief to people affected by the war in the Mannar region of Northern Sri Lanka.

A spokesperson for the Mannar Welfare Association, said: “We are very much humbled by this gift. We will be able to expand our projects thanks to this timely donation, helping so many more needy people in the Mannar district of Sri Lanka. We thank Mr. Kanadasamy Mugunthan for nominating our charity and we wish him success in his business.”

Susan Nash, trade communications manager for Mondelēz International, said: “It’s fantastic to see our amazing Win-Win competition won by a forward-looking independent retailer who will use the cash prize to improve his store for his customers.”

In addition, four retailers also walked away with prizes of £2,500 for themselves and their stores, and £2,500 for charity:

Keval described the prize as “a total surprise – really great!”, and nominated a local charity that he’s been working with for many years.

Bay said: “It’s really exciting to win this. We’re delighted that we’ll be able to pass on the £2,500 to a local community charity that’s very close to our hearts at this store.”

Nash said: “It’s great that so many brilliant and worthy charities, close to the hearts of great local retailers, will benefit from their share of the prizes from all of our winners.

“Independent convenience retailers have always been incredibly important partners to our business. They work tirelessly to serve local communities, and that has never been more evident than during the crisis. Win-Win is just one of the many ways that we’ve supported the independent convenience channel throughout this difficult year.”