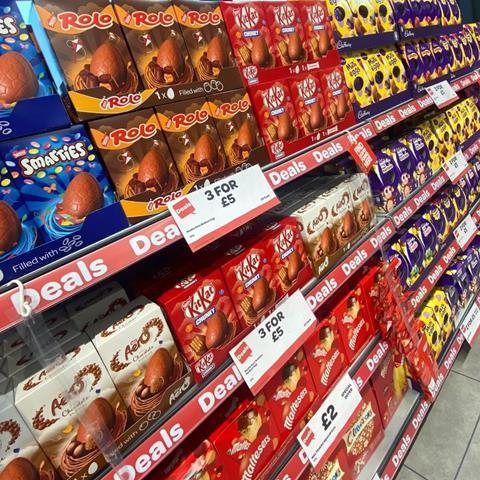 While not everyone could top last year’s lockdown sales, retailers told Convenience Store they were pleased with the Easter trade, with many reporting shell eggs had sold out.

One Stop Mount Nod in Coventry put in a strong performance. “We had a very good week,” said owner Aman Uppal. “Last year we sold out of shell eggs on the Saturday before. We were just all caught off guard.”

Keen not to have a repeat of last year he had a “massive order” delivered earlier this month. “You have to take a risk,” he said. It paid off, with the eggs selling out over the bank holiday. “I put it purely down to prices One Stop have gone with - they ran a stunt deal on large eggs, which are normally between £3 and £4 eggs, were on at £2.50, which really drove volume. At one point it was the cheapest price in the country because I checked with all the multiples. Customers knew that and it really reflected in the sales. Also, this had a healthy margin so it was a win for the customer and a win for the retailer. I thank One Stop for what they’ve managed to pull off, it was great. Customers were really appreciative too because money is very tight in respect of these cost rises that we’re all feeling. Easter was a nice, welcome treat for everyone.

“Also we had a nice bit of weather so it was decent. BBQ meats and coal and soft drinks and alcohol - we saw an uplift in all those categories. It’s nice, setting us up for the summer.” He claimed that this followed on from a strong Mother’s Day where Yankee Candles were in high demand and he sold out of flowers.

Welsh Spar retailer Conrad Davies also reported sales growth. “Our sales are up on last year,” he said. “I need to look at it properly in terms of actual items sold - you can’t just look at top line figures at the moment, but it’s been good.”

He claimed that lack of availability on Mini Eggs resulted in an uplift for other novelty lines. “We had quantity shortages on Mini Eggs. Nobody seemed to have them in the area. They sold out early, which put pressure on all the other novelty confectionery lines at the till end.

“Shell eggs sold out on Saturday night, and all the gifting stuff - flowers and cards did really well and booze did well.”

Poor weather meant that fresh meat sales underperformed. “Meats were disappointing, we never got the hot weather,” he said. However, the business used its Snappy Shopper app to bump up sales. “One of our stores is too big to open on a Sunday, so the store is physically closed, but delivery did well,” explained Conrad.

Morrisons Daily retailer Harj Dhasee reported a slight decline versus Easter weekend 2021, but claimed that the month was “looking quite healthy”.

“The pubs weren’t open last year and we were in lockdown, so we didn’t expect to do as well. But Morrisons flowers did really well, so did beers, wines & spirits, and ice creams. We had a handful of shell eggs left on Sunday, but they’ve sold now.”

Meat was a particularly strong seller for the Cotswolds-based retailer. “Morrisons had a new gourmet meat range with a tomahawk steak for £24, which all sold out. There was a three for £10 on BBQ lines - we sold shed loads.”

In Newry, Northern Ireland, Mulkerns Spar Jonesborough manager Enya McAteer claimed that business was much busier than she had expected. “Last year everything was locked down here so people had no choice, but to come here,” she said. “But this year with things opening up I expected it to be a lot quieter than it was, so it was a good weekend.”

Despite increasing her orders of shell eggs, they still sold out early. “We had no Easter Eggs, we sold out on the Saturday. I actually ordered a pallet more than I did last year! I was a bit nervous, but I knew they would go. People were lifting everything they could find, they all left it to the last minute. Within confectionery boxed chocolates did very well when there were no Easter eggs left.”

Flowers and food to go were also winners. “My flower sales were through the roof, I have a load of planters and fresh cut flowers and people were out visiting relatives and friends so the performance on that was very good,” said Enya. “We also had our Sunday carvery up and running this year so a lot more people were choosing that option over buying meat and cooking it.”

MJ’s Premier in Royton, Greater Manchester, saw a slight dip in sales versus last Easter because the store had performed strongly in lockdown, but owner Justin Whittaker claimed that the business still put in a good performance. “We sold out of Easter eggs,” he said. “We did excellent on the fresh side of it - with supermarkets being closed it’s always a time to showcase chicken breast and vegetables.

“We couldn’t buy enough Mini Eggs to last us through the Easter period,” he added. “The Mini Eggs sold so early, there wasn’t a lot of stuff knocking around. You normally get Creme eggs lasting a few months after Easter, but not this year, there was nothing anywhere.”

Justin wasn’t alone, with convenience retailers across the UK reporting that Mini Eggs were in short supply.