For more than four years, Andrea Aston worked on the design and construction of her own store. The new Save Local in Colchester is the result of her ambition 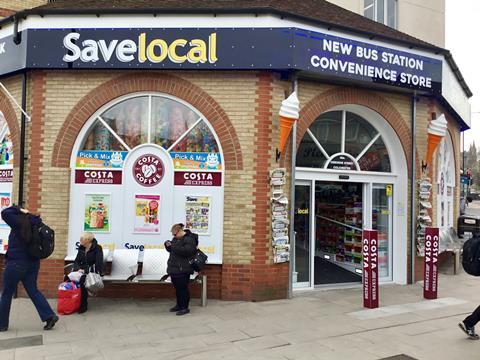 Even for experienced retailers with multiple sites, the thought of designing and building a brand new store can be daunting. For Andrea Aston, who has more than 10 years’ experience as a retail designer, opening her first store, in Colchester, Essex, was the fulfilment of a long-held ambition.

“The team have been working so hard to make it all happen, to ensure that the store is looking its best for our customers,” she says. “In total, the whole project has probably cost us in excess of £350,000.”

It’s a big step for Andrea but partner Geoff Sharp, who has more than 45 years’ retail experience, has supported her throughout the venture. His main role now is to mentor the young and enthusiastic store manager Sam Warner. “Geoff is such an experienced business man so he knows all about dealing with suppliers and making sure that stock is well presented,” Andrea explains.

“When I hear him talk about attention to detail I know that he has got that from me as that has always been my motto.”

Andrea says her time designing stores for other retailers inspired the four-year development of her Save Local store. Even while working on other projects, the dream of owning her own store never went away.

“It seems a bit surreal at the moment,” Andrea admits. “When you’ve had a vision for so long about what you want your store to look like it doesn’t seem real when you’ve actually done it. It’s a dream come true.”

The former Gala Bingo site in Colchester went up for auction in 2014. Many buyers and retailers were put off by the sheer time and effort needed to convert the building, but Andrea and her team embraced the challenge.

“You wouldn’t believe the amount of work we had to do to remove the carpets, wooden bar and strip everything back. We filled 16 big skips full of rubbish,” Andrea says.

“I spent so much time trying to get everything perfect. The amount of times I had to rip up the plans and start again - you just don’t know where to put things until you actually clear the site and start moving stuff around in the store.”

After many hours of planning and redesigning, Save Local, Colchester, opened its doors in March this year.

One of the first decisions was choosing a wholesaler to supply the store, and for Andrea the support she has received from retail group Redorange and distributor Nisa proves that she made the right decision.

“The team at Redorange have been great. I would definitely recommend them. They’ve supported us throughout and we’ve been able to get all the stock we need,” she says.

“Save Local is our own brand but we are glad that we have the backing of a Nisa partner. We can’t see a problem with the Co-op takeover just as long as we receive the stock OK and they don’t try and buy me out!”

Andrea has high hopes for a busy summer and has prepared staff to deal with a potential increase in footfall.

She says: “I’ve told all the staff that they shouldn’t be worried about dealing with increasing demand.

“We want people to be queuing out the door in the summer. The more people that find out about the store or pass it while going to work, the better it is going to be for our business.”

The unique shape of the store has been fully utilised with specially designed point of sale displayed using the in-store windows. Andrea has complemented the signage with a spacious and modern store design.

“The store is right next to Colchester bus station,” she says, “so we need to make it easy for the drivers to come in and do their shopping. The store is open from 5.30am in the morning until 8.30pm at night. That way we can make the most of the early morning trade.

“At the moment, we tend to see trade drop off at about 8.30pm but during the summer we have the option to open later. Because of our size and licence agreement we aren’t restricted in terms of trading.”

To cater for early risers, snacks and confectionery sit at the front of the store along with food to go and soft drinks, including a slush machine, orange juice dispenser and Costa Coffee machine.

The store also offers its own Sandwich Bar, providing both hot and cold food including sandwiches, cakes, pasties and jacket potatoes.

“We are very proud of our Sandwich Bar,” Andrea adds. “We felt it was important to offer a range of food options for busy shoppers.”

Elsewhere, the Pick ‘n’ Mix unit is one of the largest in the county, she asserts. “It is really great for all the school kids that are passing through the town or getting the bus from the bus station next door.”

The top-up shopper mission plays a key role in the product mix, too.

“We have all the grocery lines that shoppers would expect,” she states. “We’re looking to offer something for the vast majority of people in Colchester.”

An extensive selection of fruit and vegetables, meat and dairy sit within open chillers positioned near the front of the store, allowing shoppers to do a speedy shop. Frozen foods are also well catered for at the back, with alcohol available from the chiller or ambient aisle.

Andrea’s aim is to draw as many people into the store as possible. “There isn’t much in the way of direct competition. There is a Sainsbury’s Local and Tesco Express but they are all the way over on the other side of town,” she says.

“There are a few newsagents in the town centre but nothing that offers the kind of depth in range that we do.”

Hence the Save Local team are capitalising on the gap in the market for a modern c-store by creating their own sandwich ordering service, “which will allow office workers to pick up their lunch in advance but still have it made fresh in-store”.

Like many business owners taking on a new venture, Andrea has been thankful for the support of her team in making the store such an early success.

She says: “Everyone is so good at making sure the quality of the store shines through. Take our orange juice dispenser - we are already the supplier’s biggest customer and staff are always on hand to make sure the unit is fully stocked.

“Customer service is also so important. My daughter was working in the shop over Easter and while serving an elderly lady she thanked her for coming to the store. The lady was so shocked because people just don’t take the time to say those things anymore.”

This commitment to friendly service has paid off, says Andrea, “as everything has surpassed our expectations, which is really positive”.

After such a lot of effort and hard work, Andrea is keen to maintain her high standards and build on the store’s success.

This includes working towards an ambitious sales target of £60,000 a week. “If we do reach that figure I’ll be very happy,” Andrea says. “I might even retire! It just proves that the time and money that we have invested in the store has been worthwhile.”

With basket spend in the first two months of trading already exceeding £5, the store’s sales estimate may well be attainable.

Andrea is also working on the store’s social media presence and advertising, which includes sending out flyers to local residents. “I’m working on getting the store’s Facebook and Twitter pages up and running. It’s great to hear that local residents are already telling their friends and family about us,” she adds.

Andrea acknowledges that there are plenty of things to do at the store in the future, but hopes that the team will be award-winning material in the future.

Now that Andrea has had her bingo moment, she is determined to get a full house by opening more Save Local stores further down the line.