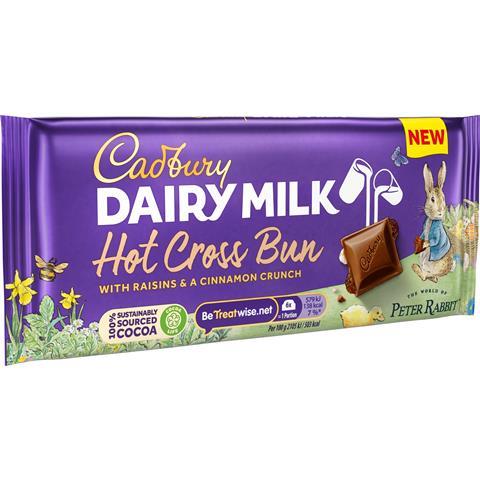 The new cinnamon crunch-flavoured Hot Cross Bun Bar is 110g and available in cases of 18 with an rrp of £1.40. “Tablets are the heartland for the Cadbury brand, so this addition to the novelties range is sure to be a hit in-store,” claims the firm.

Meanwhile, Cadbury Creme Egg is back with a new promotion, which sees it half-covered in white chocolate. The strapline ‘How do you NOT eat yours?’ will span across POS in-store to highlight the promotion to consumers. The brand will also be running a competition whereby consumers can find special hidden eggs in shops. If an egg is found in a retailer’s store, they have the chance to win Amazon vouchers of up to £1,000.

Mini Eggs and the Mini Egg Tablet, which Mondelez claims was the number one NPD last year, will also be returning for another season.

Timing is particularly important this year with Easter falling two weeks later in 2022, meaning there is a real opportunity to grow sales over the longer season, states the firm. However, the group notes that getting a “fast start” on the season is also crucial, focussing on small Easter treats, such as Cadbury Creme Egg and Cadbury Mini Eggs.