The UK’s supermarkets have had a sluggish start to the festive period with grocery sales growth slowing to just 1.1% in the last four weeks, latest total till data from Nielsen reveals. 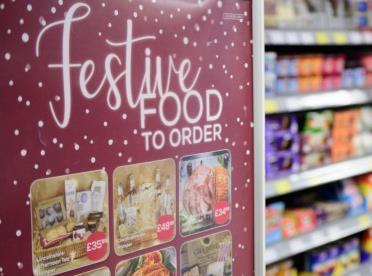 It is the second consecutive month that sales have slowed as shoppers continue to “hold back” grocery spend at the top four supermarkets.

All of the big four (Tesco, Sainsbury’s, Asda and Morrisons) experienced a decline in sales in the last 12 weeks with their combined market share falling to just below 64%, compared with 67% this time three years ago.

By comparison, almost 73% of the £500m incremental sales recorded in the last 12 weeks were made at discounters Aldi and Lidl.

Despite the slow start, grocery spending is expected to “rebound” in the next four weeks as the roll out of retailers’ high-profile Christmas advertising campaigns continues to take effect and boost the festive shopping momentum, Nielsen said.

Nielsen’s UK head of retailer and business insight Mike Watkins said: “The in store promotional activity ahead of the festive period, from Halloween to retailers’ money off vouchers, clearly proved less effective with consumers as grocery sales largely fell flat in the last four weeks at the big four supermarkets.”

“Whilst the economy remains Brits’ number one concern, rising food prices and global warming are climbing up the agenda, and are all motivating shoppers to spend differently.

“Moreover, with the continued uncertainty around Brexit and now a general election on the horizon, shoppers are increasingly adopting a savings mindset. What’s more, over half of UK shoppers now prefer to save any spare cash rather than spend it and are also switching spend to the discounters and high street value retail chains.

“This has caused a relatively slow uptake to the promotions in the last few weeks, but we can expect the shopping momentum to pick up as the seasonal period draws closer and shoppers embrace the festive spirit,” Watkins addded.