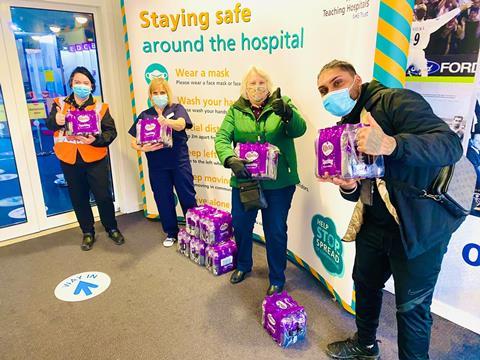 More than 125 convenience retailers are giving away £380,000 worth of Ribena Sparkling to local causes after the last donation set up by Suntory Beverage and Food GB&I “got so much traction”.

Retailers from symbol groups including Nisa, Londis, Premier, Budgens, One Stop, Spar and Best-One will this time receive 164 pallets of Ribena Sparkling 500ml between them.

The last donation that took place in December just before Christmas and saw more than 40 independent retailers distribute £100,000 worth of the product, equating to 70 palettes.

“Retailers have always played a pivotal role in the heart of their neighbourhoods and have worked tirelessly over the past year to serve and give back to their customers.

“Our partnership with these community champions means that together we’ve delivered on SBF GB&I’s Growing For Good vision, providing over a quarter of a million drinks to those that need it most during the Covid-19 pandemic.”

Londis retailer Atul Sodha told Conveniencestore.co.uk: “It’s amazing how the independent retailing bond is further enhanced with the camaraderie created through this initiative to grow for good in collaboration with SBF GB&I and our communities.

“I am so touched that we’re able to help on a national scale.”

Premier retailer Serge Notay in West Yorkshire is also taking part in the initiative for the second time, catering for the existing charities the store served with the first donation, but with others onboard too.

“We’ve got a lot more traction than we did at Christmas, because we are the only shop that is stocking Little Moons in the area.

“We had a video go viral on Tik Tok, and from there people have been following us on Instagram and Facebook, so we’ve been able to use the momentum from that to distribute another palette of Ribena.”

Notay explained they will be giving away the stock to an Islamic charity, SKT Welfare, and Midland Langar Seva Society.

“This opportunity with SBF GB&I is earning us goodwill,” Notay added.

Spar retailers including Sunita Aggarwal and Julian Taylor-Green are also participating in the initiative again. They both said their share of Ribena Sparkling will be given to NHS staff working on the front line at local hospitals.

“It’s about acknowledging the people that are struggling in a particularly difficult time and thanking the people who are getting us back to some form of normality,” said Taylor-Green.

Aggarwal, who owns Spar stores in Wigston and Hackenthorpe, said: “It’s amazing what SBF GB&I are doing, and it’s given me the motivation and encouragement to do something like this.”

She explained in the week of her husband’s anniversary, who passed away in April last year due to Covid-19, she will be looking to get support from retailers and suppliers in donating “goodies” to everyone’s local hospitals.

“Because that’s what Raj was about,” she said. “We went into lockdown, and the first thing he did was donate supplies to the NHS workers at Glenfield Hospital, and I think that just shows his personality.”