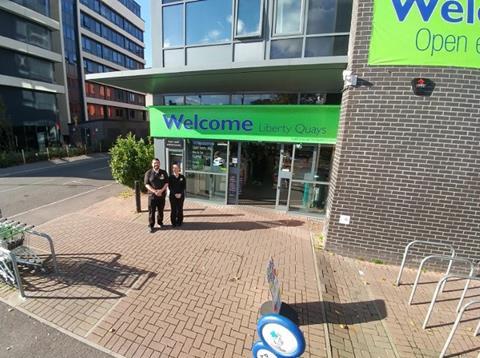 Welcome Co-op franchisee Richard Inglis won the Best Use of Technology Award at CRA 2018. The award applied to his Liberty Quays store in Southampton, but he uses the same approach across his three stores in the city. The technology includes a self-designed cloud-based ordering system, which facilitates the back-of-store bakery production; an online message board used by all staff; a cutting-edge tobacco gantry; alarm and CCTV system; and in-store screens. Richard runs a well-oiled machine, with sales up 4% year-on-year to about £55,000 per week.

An automated bakery ordering system using Google sheets enables the bakery at Liberty Quays to get the most up-to-date requirements for the three stores. It prints receipts of sale and wastage every morning and calculates projections on past data, all free and cloud-based. “You can also flag up if it’s a one-off event and over-ride the system,” Richard explains.

The media screens are driven by Rasberry Pi 3in units which, for under £100, can live stream promotions. The promotions are loaded from a cloud-based supplier and can be changed across all three stores in seconds from anywhere in the world.

Richard has introduced a Navarra tobacco vending machine and slashed the number of lines from 136 to less than 40, resulting in a sales increase and reduced stockholding.

“My customers and staff love it. It has increased service speed, increased space for other lines behind the counter, and improved security,” he says.

For CCTV, the business uses Network Video Recorders, which Richard says are able to produce a picture that will easily result in an ID from a crime.