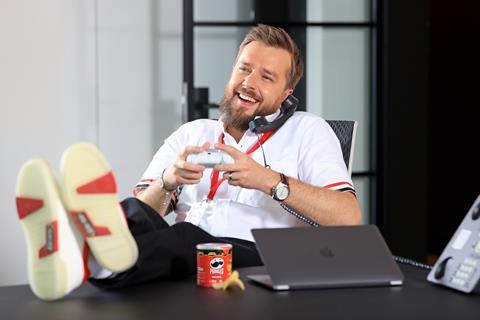 Pringles is looking for applicants for the world’s first-ever chance to get paid to work in a video game. The successful candidate will not only receive £20,000 but will also be transformed into a non-playable character (NPC) and will have their face immortalised in a video game.

The Mind Popping position, which is now open to applicants, will see one chosen candidate paid real money to appear as a Pringles vending machine refiller NPC in Train Sim World 2, available with the Xbox Game Pass. Virtually, the winner’s avatar will be busy at work stacking Pringles in the world of Train Sim World 2, while in reality, they will be carrying on with their day-to-day life and will get paid £20,000.

Stirling in his brand ambassador role will be putting his expert match making wit to good use, as he kicks off the search to help, encourage and champion those lucky people who want to get paid to work in a video game.

Applications are officially open in UK, France and Germany, and Pringles will randomly select 50 candidates to go through to the shortlist, where their application will be judged on its creativity, originality and rationale as to why they will make the best Pringles vending machine refiller NPC. One successful applicant will then be chosen and their likeness will be virtually reproduced and 3D modelled, to appear in Train Sim World 2 from September.

The snacking brand is also offering a customised Pringles Xbox Series S as a runner up prize for one lucky entrant.

Iain Stirling said: “We now live in a world where you can get paid to work in a video game as a Pringles vending machine re-filler NPC! My new role is to encourage people to get involved, be creative and apply for this once in a lifetime role!

“It’s important to plan and prepare for the role of a lifetime and I am hoping my match-making wit inspires people to get involved. I am devastated I can’t apply!”

Aisling O’Hara, European marketing manager at Pringles, said: “Iain knows the lengths people will go to become famous in the real world, and we hope he’ll help us find someone who wants to become famous in the virtual world. We’re looking forward to seeing the entries – it’s a once in a lifetime opportunity and we want people to get as creative as possible with their applications. Who wouldn’t want to Stay in the Game and get paid?”