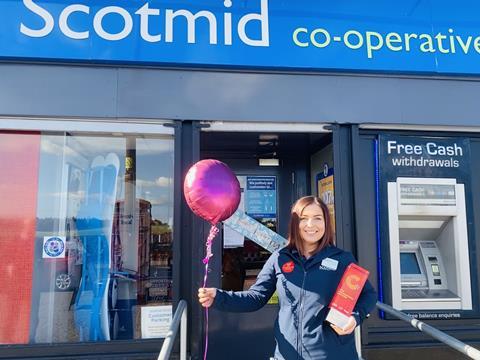 Natalie was isolating when C-Store called to interview her for our Sales Colleague of the Year Award as her young daughter recovered from a mild case of Covid-19. Of course no one likes staying inside, but it was especially hard for Natalie who is used to being crazy busy. 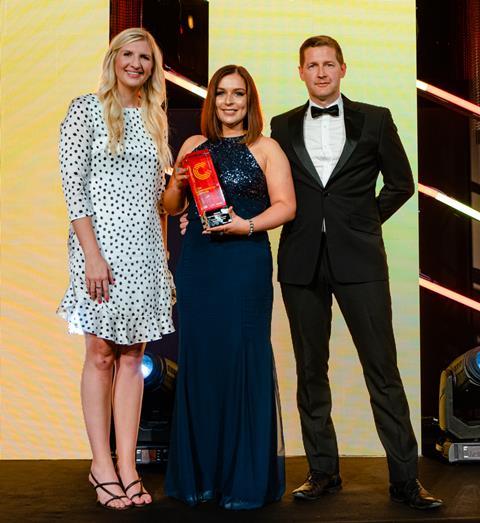 Even before Covid-19 hit, Natalie was studying full-time for a degree in accounting, whilst working full-time at Scotmid. She then accepted a promotion to senior team leader and found herself under extreme pressure to keep people fed during the pandemic, whilst still squeezing in her studies.

Natalie recalls when the virus first made its mark. “Everything was panic - you saw the shelves start to empty,” she says. “Our demographic is a lot of pensioners and all of a sudden they disappeared and we thought ‘how are they getting everything if they aren’t coming in?’

“I like marketing and the social media side of things,” she explains. “I thought we’ll just set up a Facebook group - Menstrie Convenience Community Group - and see if we can rally some volunteers.” Since the customers couldn’t come out, Natalie decided to go to them. “I was aware that some stores did Snappy Shopper and I had pushed and pushed for it in the store, but we’d never had it and I thought let’s just do something like that ourselves,” she said.

The support she received was overwhelming. “I was expecting a positive response, but we ended up with 200 volunteers and there were constant messages and phone calls - it was an amazing response and that put us on the map.” 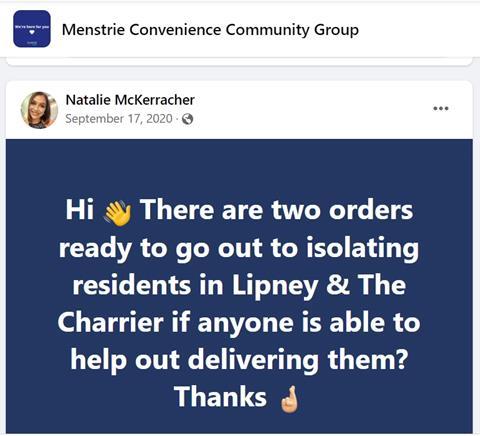 Natalie set up a delivery service at the store, but there were many hurdles to overcome. “It was all cash based - we’d have an order in the morning and put it through ourselves on the till without taking payment, so we were trusting the customer,” she says. “We were then phoning them and asking them what they were paying with so that we could have the right change. Then the volunteer would bring the money back and we’d have to do all the sanitizing of the cash. It was a lot of work to begin with and when it really took off it was a lot of pressure.”

Desperate to improve the situation, Natalie turned to Scotmid for support. “I said to IT there has to be a way that we can take money over the phone - the demand is there.  At that point we weren’t sure whether the virus was on the money, so there were people that wanted it [the delivery service], but didn’t want to pay by cash.”

Scotmid enabled the store to use Square Up payment so that it could take payment by card. “As soon as we were allowed to take cards it really took off,” she says. “It’s definitely helped a lot of people.”

As well as calling for volunteers, Natalie used the Facebook group to flag up strong promotions. “We put up the super saver deals because people were worried about income, they were worried about job security, nobody knew what was happening,” she says. 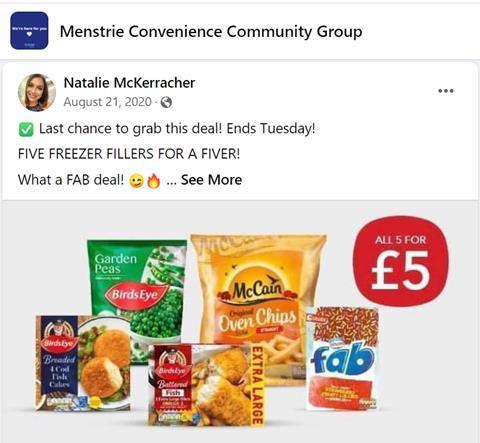 The site was also used to keep customers up to speed on what was in stock. “At the beginning we were posting pictures of when we had our toilet roll coming in because you were only allowed to go shopping once a day,” she explains.

But the Facebook group was far more than simply a virtual shop window, instead becoming a key route of communication for local groups in need. “On social media the hospitals said that the patients were struggling because they weren’t getting visitors in, so we ended up with four dump bins in-store for the NHS for donations,” she says. “We donated about three quarters to the hospital and a quarter to the care home. They were overflowing and people were buying things for them while they were in store.”

The store also worked closely with the Community Council. “We were helping Dave [Sharp] on the community council out with community bags every week - 180 a week sent to those shielding and the elderly. I spent a lot of time getting stock from other stores. Where possible we’d get them through staff discount or donating them ourselves and packaging them up.

“We also supported them with four big cages of stock for teenagers’ bags. They were £5 a bag, so I had to source the best value for money and get it in the right quantities. It was quite difficult to do within the timescales. There was a lot of planning and organisation that went into it, but somehow we’d done it.” 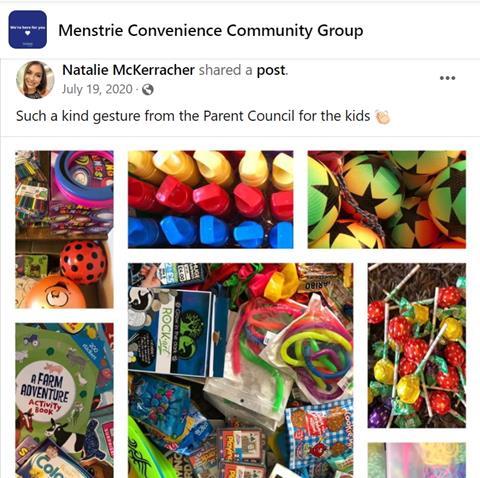 The store’s support was rewarded when the Community Council chose to buy products through them. “After the teenagers’ bags, kids’ packs went out,” says Natalie. “When Dave’s wife contacted me she wanted to give us the sales rather than Morrisons. They had quite a close tie with Morrisons - they’re a bigger store and could give them more, but they wanted to give it to us because of what we had done, so that was over £1,000 worth of stock.” 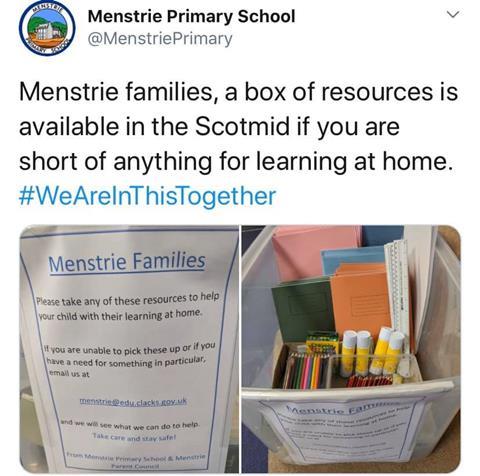 Natalie also contacted the local school to see what support they needed. “The Scottish government do the provision for free sanitary wear so when the schools closed they said people didn’t have access to that provision, so I said give us a box and we’ll put it in the shop.” The store also housed spare stationery supplies from the school for local students to help themselves to. “Whatever we could put into the store at the time to help we would do,” she says. 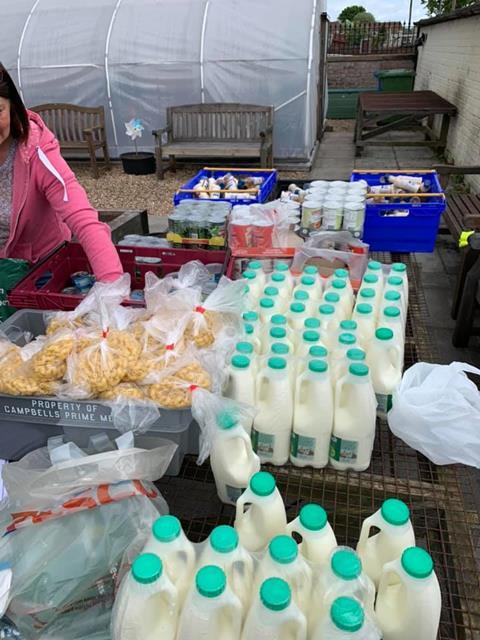 All the while, Natalie was somehow finding the time to continue her university course, as well as studying for Scotmid’s Grow Manager’s programme. “It was a total bonkers two years,” she says. “I remember being on my breaks with my earphones in trying to listen to a lecture, or coming home and sitting at the table when everyone’s gone to bed or if I was on an early [shift] then getting up at half four in the morning,” she says. “I genuinely don’t think I could do it again. With everything that’s been going on in the last year it’s almost like you’ve been running on adrenaline. I haven’t had a minute to even think about tiredness.”

Her efforts paid off when she was awarded a BA with first class honours from The University of Stirling. “I was over the moon, I wasn’t expecting it,” she says. “I knew I could do it, but I put a lot more effort into the store than I did into the studies. For me it was a no brainer. People needed it more than I needed a first class degree.” 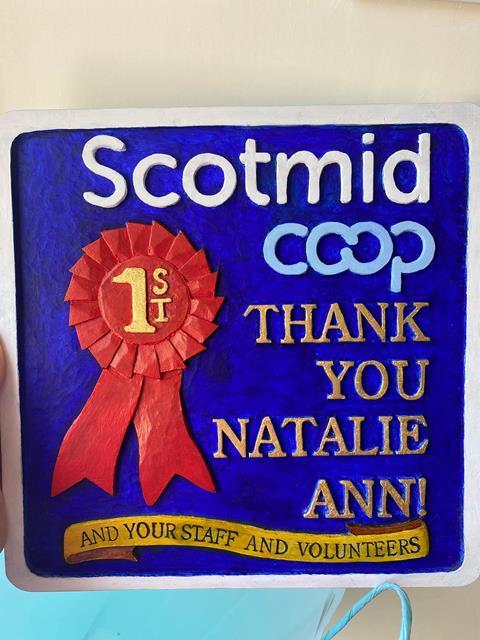 Customers are certainly hugely appreciative of what Natalie and her team achieved. One customer even made a wooden plaque emblazoned with ‘Thank you Natalie Ann’.

Natalie’s actions during the pandemic have also had a fantastic long-term impact on the store’s standing within the local community, with the team’s hard work resulting in strong customer loyalty.

She explains that the store hadn’t always been viewed in a positive light. “There was a bit of negativity about it because it had a post office in it and people felt that it took too long to get served,” she says. “It always bugged me. I just wanted to change that negativity. It’s totally done a 180 in the time I’ve been there. It was striking that balance in doing something for the community, but now the community are loyal to us. Because of everything that we’ve built up, we’ve managed to have more sales, we’ve increased our staff, it’s a whole benefit.”

She puts much of this success down to the store’s interactions on social media. “It’s created a whole different perception of the store,” she says. “It was all to do with the communication. Scotmid has a Facebook account and Twitter, but people don’t want to see a generic company - these stores are local stores, it has to be done on a local basis, they want something that’s relevant to them, they want something they can relate to.”

She is hopeful that Scotmid will modernise its approach to social media and community interaction after Menstrie’s success. “Everybody knows everybody by first names now, which was never the case before,” she says. “It shows Scotmid the value of creating these relationships in the community. These stores are local stores, everything’s got to be specific to where the store is and the community that the store is within. I’ve been pushing with Scotmid to keep the lines of communication open and keep the positive PR.” 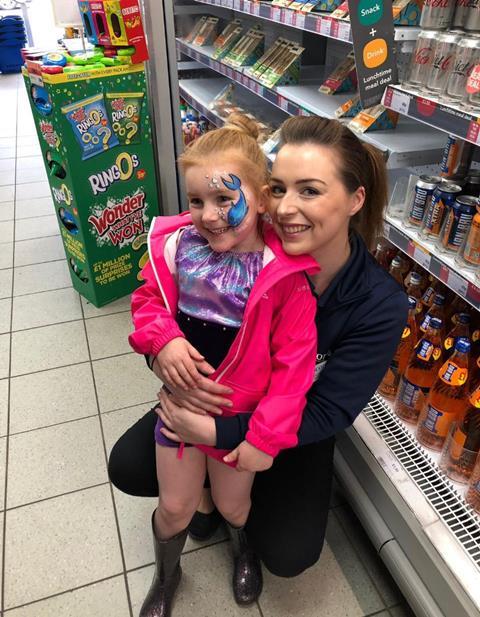 In terms of her own progression, Natalie still keeps in touch with her Menstrie “family”, but is now a store manager at another site. She is keen to stay in retail. “I just love it,” she gushes. “I could apply for graduate jobs now, but I’m choosing not to because I actually really enjoy what I do.

“Eventually I see myself doing some sort of area/regional manager role that gives me time behind a screen doing everything I like to do, but also being out and about checking standards, people, community. At the moment I’ve got so much passion for retail. For me it’s not just about driving sales, it’s doing that community side of it and building it up. It’s not just the business that’s benefitting, it’s the community.”