As the home delivery market twists and turns, Snappy Shopper CEO Mike Callachan speaks to ConvenienceStore.co.uk about the growth of the sector and why dark stores are such a huge threat to independent retailers. 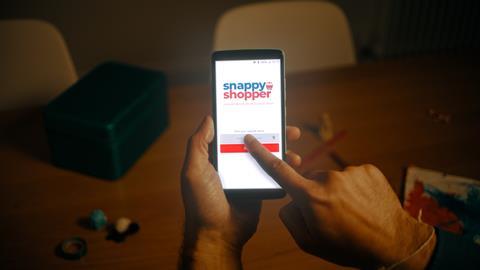 The convenience home delivery sector has grown significantly over the past two years, with the pandemic driving shopper habits towards online. More retailers are dipping their toe into the sector on a daily basis however Callachan believes that there’s still more to come in home delivery but with that opportunity brings a dark threat.

“The direction of travel is really clear. We can see that not only in the number of retailers that we’re talking to, but also the increased demand from consumers.”

He explains that this demand could become a double-edged sword for convenience as consumers come to expect speedy deliveries, regardless of where they come from, leading to them to turn to dark store operators that don’t require a physical site.

“At the end of the day, it doesn’t really matter what retailers do or don’t do - if there’s a demand from the consumer, and the retailers don’t do delivery, then someone else will. And I think we’ve seen that with the advent of a whole new dark store operator model match where they believe that they can take the customers away from the local high street without having a shop.”

He stresses that retailers need to be aware of this growth in dark store operators and the impact they could have on a business. “Anyone that doesn’t see it as a threat, I can’t understand the thinking for that. It’s undeniable that it is a threat to local community stores. I think how big is the threat is probably the better question.

“There’s a finite number of consumers, we know that there’s a finite amount of spend in the grocery space. So what slice of the pie are they going to take? Is it going to be small, is it going to be big? But either way, from our perspective, and working with a lot of the local community retailers that we’ve partnered with, if they were to lose even a relatively small percentage of the local customer base, it could have a really profound impact on the viability of their shop.”

Dark store operators offering speedy home delivery services are nothing new but are some retailers are only seeing the extent of the issue now? “I think there are those that have seen it coming and those that perhaps are now, just realising the level of threat.

“If you are a retailer and you felt like you couldn’t solve that online problem. And you’re looking out your shop window on a day where the shop was quiet and you’re seeing the dark store operator vehicle driving back and forward past your front door. I think that would be alarming for any retailer.”

That’s not to say there aren’t successes to be found in the convenience channel, however Callachan believes that more positivity is needed. “That’s something that we need to get better at as a business. There was an article about one of our One Stop retailers recently hitting the £1m revenue milestone. And I think we need to be talking about those success stories more.”

He warns that dark stores could spell trouble for the entire high street. “In my city centre high street in Dundee, unfortunately, we’ve really only got coffee shops, betting shops and charity shops. So as a destination, it’s not exciting for a consumer to go out and have a day shopping. So I think it would be a travesty if other local community high streets suffered in the same way and we started to see empty shops, and family community businesses disappearing, because other businesses with good technology took their customers.”

Callachan says that retailers need to be considering online as part of their offering for face getting left behind.

“Our viewpoint is really clear that we believe that to be a viable retailer in bricks and mortar, you need to also offer online. We don’t think that a dark store operator in a warehouse that customers cannot shop in makes sense. And we don’t think having a local high street store that you can’t order online makes sense. So those are the two ends of the spectrum. We think and believe firmly that the hybrid model of welcoming customers into your shop, when it suits them to come in, but also offering them a delivery service that’s convenient, is the winning formula. And we think that, that that that ultimately creates the best of both worlds for the consumer, where if they want to go to the local High Street and visit the shops, physically, they can. Whereas if they just want to get that delivery and stay at home, that’s also an option.”

The home delivery sector has had a tumultuous 18 months and keeping track of the new entrants, mergers and partnerships can be tricky however Callachan doesn’t believe changes in the sector are done with just yet. “I think we’re already starting to see consolidation in this market, which is not unexpected. There’s not enough room for as many players as there is. At the moment, it’s crowded for the consumer, and that’s not good.

We’re focused on the partnership model with local retailers. And we think that is what sets us apart in the marketplace. Whenever there’s a worldwide shift in consumer behavior, there’s always going to be new entrants because people will look at it and say, there’s a wave that I can ride here.”

With so many entrants, Callachan believes the technology side is what makes the difference for Snappy Shopper. “I think for us being a technology business is also really important because we spent 12-18 months building the software. So a lot of the technology we’ve built, that enables the retailer is really cutting edge, especially around stock and inventory and substitutions and packing and all these things that our platform kind of guides the retailer through. Whereas there are a lot of people who have licensed software to try and compete in this space, it’s not the wrong technology; there are people who have taken off the shelf solutions and try to adjust them and mould them into what a convenience retailer needs. But one of the things that we identified really early was that we needed people who understood the industry, shaping our product.”

When looking for people to help shape the offer, Snappy Shopper attracted headlines when former Sainsbury’s CEO Justin King came on board as an investor. This, alongside a partnership with payments provider PayPoint, marked a show of intent for the business. Callachan explains what King and PayPoint bring to the Snappy Shopper party. “We’ve been very sort of privileged to attract the investors that we have. The level of expertise he [Justin King] brings to our boardroom, and PayPoint, you don’t get a much bigger brand than that in convenience. So for us, it’s about taking all of that expertise into the melting pot alongside all of the feedback from our retailers, and the consumers, and defining a winning roadmap.”

With this expertise on board, what’s next for Snappy Shopper? “Because we started in Scotland we feel there’s more of a mature market here but our focus on UK-wide rollout is key, and it’s right at the top of our list. We’re getting great traction across all of the British Isles. So we’ve got great stores in England, Wales and Northern Ireland on the platform.”

With presence in Northern Ireland growing, does he see a move into the Republic of Ireland for the platform? “We’re having a number of discussions there,” he adds. ”Our ambition is to get full coverage and we’re well on our way to achieving that.”