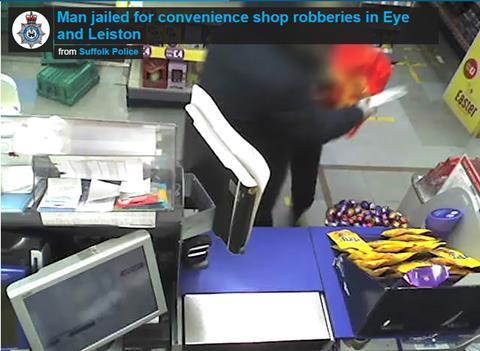 A 39-year-old man has been given a 10-year sentence for two robbery incidents at convenience shops in Suffolk.

Craig Johnson appeared before Ipswich Crown Court on Friday 4 February, where he was sentenced to six years and three months’ imprisonment, plus a three years and nine months extended licence period.

The first offence took place on Sunday 29 March 2020, at McColl’s in Church Street, Eye, where Johnson entered the shop carrying a knife.

He grabbed hold of a female member of staff by the neck and dragged her around the shop floor holding the knife to her neck, whilst shouting: “give me the money, open the tills, give me the money now.”

Johnson continued to drag the victim around by the neck and hair whilst leaning over the shop counter and attempting to open the tills but was unsuccessful. He then attempted to drag the victim out of the shop via the front door, but then dragged her back inside and again attempted to open the till and threatened another member of staff with the knife who was behind the counter.

Johnson then left the shop still brandishing the knife but had dropped the carrier bag on the floor. No money or other items were stolen, but the victim was left extremely shaken and sustained cuts and bruises during the incident.

The second incident occurred later the same evening, at around 8.45pm, at Londis in Sizewell Road, Leiston. Johnson again entered the premises carrying a knife and demanded a member of staff opened the till.

Johnson then went into the rear office with the victim and pushed him up against the wall and after a short scuffle, Johnson asked where the safe was. The victim then managed to escape by saying he would go and get the key.

Johnson then went back behind the counter and took a number of packets of tobacco to add to the cash he had already stolen, and he then left the shop.

Johnson was first arrested by officers investigating these incidents the following day (30 March) and was subsequently bailed in connection with them, but he was wanted on recall to prison and so remained off the streets at that time. He was issued with a summons charging him with the offences in November that year, appearing before magistrates on 18 December 2020.

Detective Inspector Matt Adams said: “Both of these crimes would have been horrific experiences for the shop staff to endure. During the attempted robbery in Eye, Craig Johnson dragged a young shop assistant around the store by her hair while holding a knife to her neck, he literally threw her around like a rag doll whilst demanding money from the tills.

“This extreme use of violence was completely unnecessary. I found the CCTV of the incident quite disturbing and it’s hard to imagine the fear this young lady went through. Although she suffered several cuts and bruises, I am thankful that she escaped without serious injury.

“Johnson has an appalling history of violent crime - he has previous convictions for conspiracy to commit robbery and robbery, serving significant prison terms as a result. When he committed these most recent offences he was still on parole as he was serving an extended six-year licence from a previous sentence.

“I am extremely pleased to see Craig Johnson returned to prison for a considerable length of time and I hope this will provide some comfort and reassurance to his victims.”