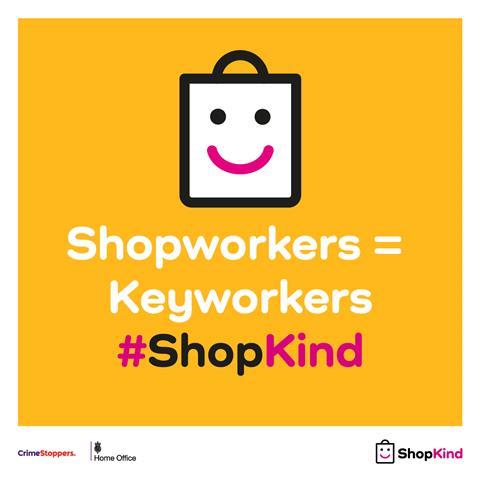 Retailers, trade bodies, the Home Office and Crimestoppers have joined forces to launch a new campaign urging the public to ShopKind.

The #ShopKind campaign focuses on the abuse and violence towards shopworkers and calls on the public to be mindful of retail staff’s work over the past year and treat them with respect, kindness and gratitude.

According to the Association of Convenience Stores’ 2021 Crime Report there has been more than 1.2 million incidents of verbal abuse over the past year, and around 40,000 incidents of violence against people working in convenience stores. Of these, more than a quarter involved a weapon, such as a knife, hammer, axe, or syringe.

The report also found that two-thirds of retailers (65%) had experienced Covid-19 related threats, with the most common causes of abuse being: reminding customers to wear face coverings, reminding customers of social distancing measures and queueing outside stores.

The campaign is backed by the Home Office and supported by major high street retailers as well as independent shopkeepers, and Usdaw. The #ShopKind campaign will be visible across high streets and social media from today.

Home Secretary Priti Patel said: “Throughout the pandemic, shop staff have been the lifeline for many in our communities, and I am grateful for their vital service.

“Violence and abuse towards shop workers is utterly despicable and unacceptable, everyone has the right to feel safe at work. As the daughter of shopkeepers, I fully support ShopKind, a reminder to customers to consider their behaviour towards shop staff, and I would encourage all retailers to fully support it.”

Minister for Small Business, Consumers and Labour Markets Paul Scully added: “Retail workers have played an essential role in supporting communities across the country during the pandemic and have worked tirelessly to put covid-secure measures in place to keep us all safe.

“Staff in our great shops, pubs, hairdressers and more should be treated with the utmost respect and gratitude – after such a difficult year, we all have a duty to treat each other with kindness.”

The campaign is being backed by the entire retail industry.

Chief executive at the Association of Convenience Stores James Lowman said: “Convenience stores have been open throughout the pandemic, keeping communities going and being first to adapt to keep customers and colleagues safe through Covid secure measures. While the majority of customers have been incredibly supportive and embody the messages of the ShopKind campaign, there are still too many people being abusive and violent to retailers and their colleagues. We fully support ShopKind, which serves as an important reminder of the essential work that convenience stores have done over the last year and continue to do to as the rest of retail reopens.”

Co-op’s director of campaigns and public affairs Paul Gerrard said: “No one should have to face violence and abuse just for doing their job, and nothing is more important to us than the safety and wellbeing of shopworkers who work tirelessly within communities – they deserve thanks, not abuse, threats and violence. They also deserve for the law to better protect them as they go about their daily working lives. It does now in Scotland, but not in the rest of the United Kingdom and so we continue to call for Government to show that it is listening and to send out a clear message that anti-social behaviour and attacks on shopworkers is not acceptable.”

Chief executive at Southern Co-op Mark Smith said: “Despite our colleagues going above and beyond to serve our customers and communities during the pandemic, they have still had to suffer verbal abuse, threats and violent attacks. We had nearly 18,000 reports of crime at our 201 stores in 2020 - an increase of 25% from 2019. This is unacceptable and must stop.

“While we continue to invest in and take action to protect our colleagues, the ShopKind campaign raises the public profile of this issue and is a positive message of support for retail workers across the country.”

Chief executive of the British Retail Consortium Helen Dickinson OBE said: “#ShopKind is a really important campaign with a clear message for us all. Incidents of violence and abuse of people in customer facing roles have been on the rise since the beginning of the pandemic, with colleagues being spat at, racially abused, and threatened with weapons by an increasing minority of people. Retail workers are playing a vital role keeping customers and colleagues in stores safe and ensuring we have access to goods. So now, as non-essential shops reopen, we all need to play our part - be kind and shop kind.”

The campaign is also being supported by Crimestoppers and workers union Usdaw.

Mark Hallas, chief executive of the charity Crimestoppers, said: “It’s truly shocking to think that at a time when we are all so reliant on retail workers to survive during the pandemic, that so many of them are encountering verbal and physical abuse on a daily basis.

“At a time of such national disruption due to Covid-19, shop staff should be appreciated by us all and thanked, not abused. Despite retailers’ vital role in the community, at the frontline, there are a significant minority of people who believe that being courteous and polite isn’t important. Our message today is clear – despite what is going on in anyone’s life, no shop worker deserves to be treated badly, let alone verbally or physically abused, We’re asking everyone to take a step back and think about the true value of these workers – supporting individuals, families and entire communities. So please ShopKind.”

General secretary of Usdaw Paddy Lillis said: “The final results of Usdaw’s 2020 survey show that 9 in 10 shopworkers had been abused last year. Usdaw is pleased that retailers, the trade union, Government and Crimestoppers have come together to tackle this important issue through the ShopKind campaign. It is clear that retail workers deserve to be treated with respect.” 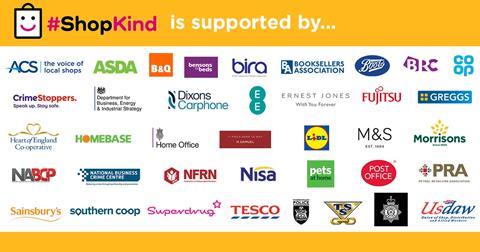