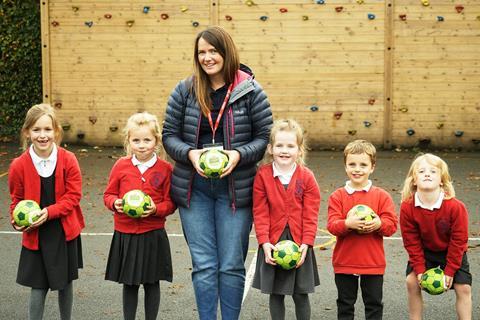 Birds Eye has helped a retailer to share £3,000 worth of sports equipment with three local schools, as part of its Kit Out Your Community competition.

Premier Gunnislake won the competition, which was initially launched in the summer as part of Birds Eye Green Cuisine’s sponsorship of the Team GB Olympic team for the 2020 Tokyo Olympics.

Premier Gunnislake store donated the £3,000 prize fund to local community causes, including Lamerton Primary School, Delaware Pre-School and Tamar Valley Pre-School – all of which received £1,000 worth of sports equipment, in the form of branded balls, bibs, hula hoops and other sports kit to help children get active.

Charlotte Southgate, store manager at Premier Gunnislake said: “We’re delighted to have won the competition and to have the chance to repay the store’s long-standing connection with the community. Our local shoppers have been so important to the store over the last few years, so it’s been great to give back to them through the Kit Out Your Community competition. A big thank you goes out to Birds Eye for this fantastic prize – it really will go a long way to reinforcing our position within the community.”

Birds Eye launched the Kit Out Your Community competition in the summer, which saw over 500 retailers apply through a redemption initiative run with the support of Shopt*. The competition was exclusive to the convenience channel, and helped to celebrate the Green Cuisine brand becoming the official plant-based supporter of Team GB at the Tokyo Olympics. The competition not only supported Birds Eye’s ambition to make eating meat-free more mainstream, but also sought to help retailers give back to their local communities after a challenging past 18 months.

Head of convenience for Birds Eye Joss Bamber said: “Communities like that of Gunnislake are so important to convenience retailing, so we’re thrilled that we could help Premier Gunnislake give back and become an even more important part of their shoppers’ lives. The Kit Out Your Community competition was launched to celebrate Birds Eye’s partnership with the Team GB Olympic team, so it’s great that through our prize fund, we can help the next generation of budding sportspeople.”