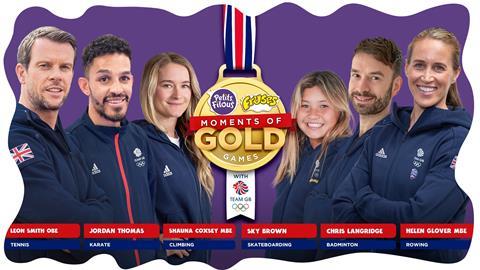 Yoplait Kids has unveiled the launch of a new on-pack promotion and line-up of Team GB ambassadors as part of its ‘Moments of Gold’ campaign.

The £2.4m ATL ‘Moments of Gold’ campaign will encourage families to be active together and create ‘moments of gold’, in what will be its biggest ever UK partnership.

Yoplait has signed six Team GB ambassadors across a range of Olympic sports, with three of these sports making their debut in this year’s Games.

The promotion forms part of Yoplait’s three-year partnership with Team GB as the Official Yogurt Partner. Prizes consist of money-can’t-buy experiences, including the chance for a VIP meet and greet with either Helen Glover or Shauna Coxsey. There will also be thousands of runner-up prizes such as vouchers for kids bikes and Team GB merchandise.

The seven-figure investment comprises of new TV adverts for Frubes and Petit Filous that will promote the partnership and on-pack competition, as well as in-store activation and a social media campaign.

“Working with an array of Team GB ambassadors will further our mission to help kids get the right daily nutrition to lead active, happy lives, growing a generation of strong, healthy kids. Kicking off ahead of a big summer of sports, it will be a great opportunity for retailers to maximise sales, help kids get active and make the yogurt aisle stand out.”