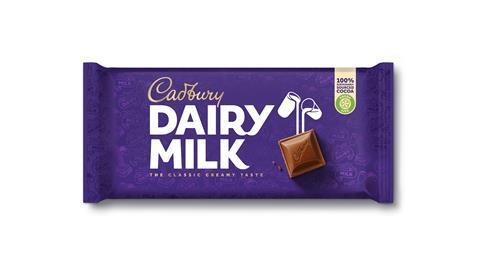 Cadbury is announcing the return of its Match & Win on-pack promotion for the fifth consecutive season. The shopper promotion will appear on packs from August through to November this year.

The Match & Win mechanic remains the same: shoppers simply buy any participating pack from Cadbury’s singles, tablets, multipacks and bags range and visit www.matchandwin.cadbury.co.uk to enter the product’s batchcode and barcode for a chance to win. The entrant will then receive a predicted score for the upcoming game week which, if it matches the result, means a guaranteed ‘WIN’ in the weekly draw.

This year, Cadbury has partnered with more football clubs – a total of 19 – and brought in bigger and better prizes than ever before. 10 lucky winners will pick up a pair of VIP tickets to matches of their choice (Aston Villa Women’s club excluded) as well as – new for 2021 – annual Sky TV packages. There are also a further 500 pairs of match tickets to be won, as well as a host of additional prizes including club shop vouchers. By building on the competition’s winning mechanic with extra prizes and more football club partners, Cadbury is helping retailers capture even more sales with this shopper promotion in 2021.

Cadbury’s Match & Win season five will be supported by a significant marketing spend including PoS material, out-of-home advertising and digital and social media support to support retailers’ sales. Retailers can visit www.deliciousdisplay.co.uk for category advice and more information on the top-selling packs across chocolate confectionery.

Brand manager for Cadbury at Mondelēz International Kelly Lawrence said: “We know shoppers will be excited to be in with a chance of winning this year’s amazing range of prizes, so Match & Win returning marks a huge opportunity for retailers to drive incremental sales. To make the most of this, retailers should stock up on participating Cadbury products and make them really visible through PoS and secondary sitings to create some footballing excitement in their stores.”