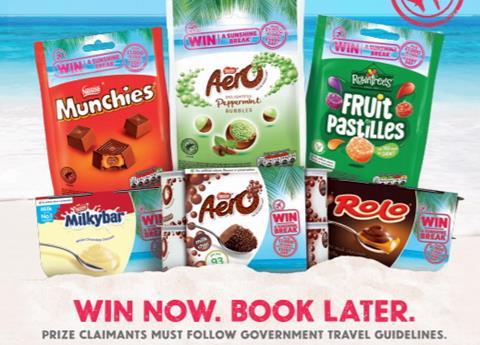 Shoppers can ‘Win a Sunshine Break’ with Nestlé confectionery and chilled desserts brands’ latest on-pack promotion. There are five top prizes of a holiday worth £10,000 up for grabs, plus a further prize of £1,000 to be won every day during the promotional period.

The ‘win now, book later’ prizes also ensure winners are able to book their holidays whilst following government guidelines for travel. The promotion features sharing formats and chilled desserts of some of Nestlé’s biggest confectionery brands including Milkybar, Aero, Munchies, Smarties, Rolo and Rowntree’s. Stock of promotional packs is available now with the promotion live from 13th September to 7th November.

‘Win a Sunshine Break’ will also benefit from a media campaign aimed at driving shoppers into stores, which will centre around out-of-home poster advertising and social media. This media is expected to be seen over 20 million adults (Zenith).

Sharing confectionery is ideal for the ‘Big Night In’ occasion and having had a sustained period of time where lockdown has restricted family and friends getting together, the desire to spend time together is now greater than ever, claims Nestlé.

Sharing formats also proved popular in 2020 as shoppers made fewer shopping trips but bought bigger baskets. Sharing bags appeared in an additional 30 million baskets in 2020, whilst chocolate blocks appeared in an additional 81 million baskets with an additional 1.5 million new shoppers buying into the format (Kantar Worldpanel, Take Home Confectionery 52w/e 27.12.20). “We expect ‘Big Night In’ occasions to continue be popular as people make up for lost time getting together with family and friends and sharing confectionery such as bags and blocks plays a key role in these occasions,” said Helen Bailor, shopper marketing manager, Nestlé Confectionery. “Add this together with the chance to win a long-awaited holiday, and we believe our ‘Win a Sunshine Break’ promotion is certain to capture shopper’s attention and drive increased sales of these popular formats in store.”