Taking a swipe at food waste

Could mobile phone technology hold the answer to cutting food waste? C-Store talks to retailers such as Hendersons who are seeing success from apps that help sell-through reduced lines 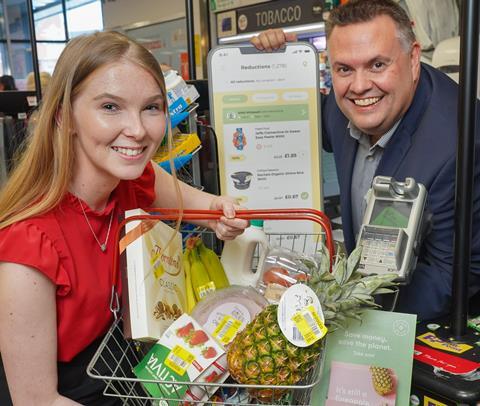 The financial cost of food waste has long been apparent to all retailers – whether it’s the cost of unsold products or waste collection services. It is doubtful whether the average shopper considers the impact of food waste on store owners, but there is evidence that consumer awareness of both the scale of food waste – and its impact on carbon emissions – is growing.

According to government agency WRAP, the UK threw away 6.6 million tonnes of household food waste in 2018, of which 70% could have been eaten. To bring the figures to life, it says household food waste would fill approximately 66,000 three-bed terraced houses, equivalent to the population of a town the size of Peterborough.

Food waste’s impact on the environment is equally alarming. According to Global Open Data for Agriculture and Nutrition (Godan), a UN-supported initiative, in the UK food waste accounts for one-quarter of man-made greenhouse gas emissions.

“Food is being put into landfill and is producing high amounts of methane, heating up the atmosphere at an alarming rate,” says Andre Laperrière, executive director of Godan. “Therefore, reducing our food waste is one of the most important issues we need to tackle sooner rather than later.”

Growing consumer awareness of the issue is helping retailers to do their bit to reduce food waste in store. The other silver lining is that we’re living in an age where there’s an app for everything.

MCA/HIM’s recent Hot Topics report (November 2019) revealed that sustainability is clearly on the radar of UK shoppers. More than one in four (27%) agreed with the statement that food-to-go stores should have zero-waste initiatives, while 54% agreed that it was “very important” to know that an operator supports sustainability. On a wider level, 29% said they discuss sustainability with family and friends, the report found.

Henderson started trialling the Gander app last autumn in 300 company-owned and independent Spar stores in Northern Ireland. The app displays reduced-to-clear food automatically and in real-time for its users, with items automatically removed from the app when sold, providing an instant feed of all reductions in-store at any time.

“We’re not changing our processes at all, which is really important to us – stores are still operating a twice-daily price reduction when products near their end date,” Nickels explains. “But Gander enables you to promote the price reductions to a wider audience. You’re marketing an area of the store you’ve never marketed before.”

Under Gander, as soon as a reduced-price yellow sticker is produced the app is updated in real time. Once the product is bought and scanned, a message is sent to Gander to remove it from the app.

Nickels says the impact so far is exceeding expectations. “It was a leap in the dark, but it seems that everyone is interested. There are now 40,000 Gander users in Northern Ireland, far more than I expected. It’s not just a particular demographic who are utilising the app, it’s all types – the environmental factor is now so important to people,” he adds.

It may seem counter-intuitive, but he now wants other big retailers to adopt the app. “It’s a strange thing to say that we want Tesco to do it, but it’s all about increasing awareness of the app – that’ll be the tipping point. The more users there are, the more our stores will benefit.”

It’s hard to calculate the impact on waste reduction at such an early stage, but anecdotal evidence is positive. “There are fewer items being reduced for a second time in a day now across the trial stores, so products are being sold earlier,” he says. “Anecdotally there’s also been a rise in sales and footfall. We’re seeing additional sales when people are buying components for an evening meal. There’s definitely a change in basket spend, but how much of a change is due to Gander is open to debate. All I can say is the operations and finance teams are very encouraged. And the retailers like it as it’s created such a buzz.”

Hendersons is planning to roll out the app to all 472 stores it distributes to. “We just need to install printers in some of the smaller stores,” Nickels explains.

Gander has also partnered with some mainland UK stores, including Spar Calver in Derbyshire, where store manager James Stead is also positive about the impact to date.

“We launched it in November. The idea is brilliant, and what’s more we don’t have to do anything and it costs us nothing,” he says. “Once we reduce the price of a product it automatically feeds through to the app. Only about 10-15 people use it regularly at the moment, but it’ll take a while to take off. If more retailers did it here it would be used more, like it is in Northern Ireland.”

James has seen a moderate drop in wastage in store, although wastage wasn’t much of a problem because of the deli, which enables the store to re-use fresh products nearing their best-before date.

“Chilled products are obviously the most popular sold though Gander, especially ready meals and cheese,” he says.

Gander co-founder Ashley Osbourne says the app will increase revenue otherwise lost to waste, increase footfall and reduce waste. “For shoppers it will provide them with the ability to save money, while allowing them to feel they are positively addressing the problem of food wastage.” 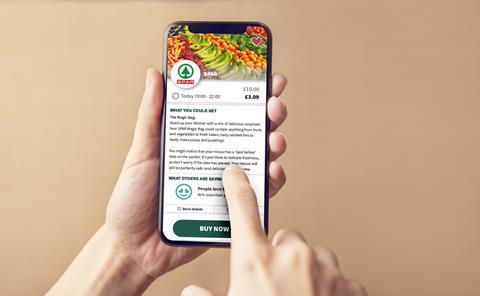 Food waste reduction app Too Good to Go allows retailers to create a ‘Magic Bag’ of discounted food, which sells for at least three times less than its existing retail value

Too Good to Go is another food waste-reduction app being adopted by retailers, including Morrisons which is trialling it with the intention of rolling it out nationwide.

The Too Good to Go app enables retailers to dispose of food that is close to its best-before date by listing it on the app and selling it at a discounted price in a so-called ‘Magic Bag’. The bags, which are collected in store, must be sold at about three times less than the retail value. The average price of a bag is about £3.50, according to Too Good to Go co-founder Jamie Crummie.

Nisa is encouraging its independent retailers to sign up to the app – and one retailer who got on board in January is Amrit Pahal. “We’re selling at least five bags every day. We put together a Magic Bag to order, but the customers don’t know what they’re going to get,” says the Walsall retailer. “I’m doing a store refit so I was going to delist lots of products anyway. Pitted black olives in brine never sell, for example, so we often put them in the bag. It’s a win win! And it’s much more environmentally sustainable than throwing the products away.”

Collection time is between 7pm and 9pm, but if he doesn’t have enough products to fill the Magic Bag, he can cancel the order.

Amrit says the main motivation for signing up to the app was waste company Veolia putting a weight clause in its new rollover contract, which he didn’t spot. “Our bin collection prices rose significantly, but we’re not throwing anything away now!” he says. “Customers really appreciate it – and recognise the environmental impact. Our ratings have been really positive on the app, above four out of five. The fact Morrisons do it too means there’s a big customer base and more awareness of the scheme.”

Footfall at Amrit’s store has also risen since introducing the service in January. “About 20% of Too Good to Go customers will come into the store and buy more stuff,” he adds.

Prior to signing up, his food waste policy was to halve prices when products reached their best-before date, then quartering the price in the last hour – “and we’d still have waste,” he says.

Too Good to Go’s Jamie Crummie says Amrit’s positive experience is replicated by other retailers. “The feedback from users is amazing, in particular independent store owners. There’s very little complexity, and they’re pleased that it reduces costs and they’re doing something worthy,” he says.

Too Good to Go also presents a “huge opportunity” to upsell, Crummie says. “Once customers come to the store they’ll buy their staples too. More than 60% of users go back to the stores, according to our research. It intensifies brand loyalty.”

Blakemore Retail has started trialling the app at 15 of its Lincolnshire stores, with plans to register more in the future if successful. In the first week of the trial, it saved 500 bags of food from being wasted. 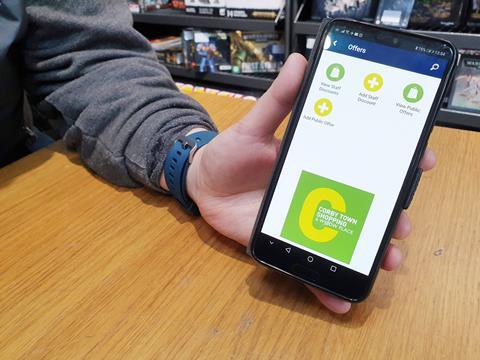 Says store manager Sarah Darlow Stearn: “We see people every day who are homeless. When you see people in that state and then we’re throwing away food, it’s not good. We have a town centre app where we can offer discounts for either members of the public, or other workers in the centre, so we can offer food at a reduced price to save it going to waste. We can put our promotions on there and then people come in and buy the deals.”

It’s early days, but these app-based solutions to reducing food waste seem to be a hit. And with a growing awareness of the apps, coupled with people’s desire to tackle food waste – and grab a bargain – the tipping point that Nickels refers to could well be within reach.

Bank on food donations to ease the problem

Donating food to those in need is a win for society and the environment, with less waste going to landfill. It is, of course, also excellent for a retailer’s community credentials.

“This way we have zero waste every day,” says store owner Imtiyaz Mamode (pictured left with a customer). “Customers are really happy and they give us respect as it’s the very best way of dealing with food wastage,” he says.

“The positive impact is that footfall is improving and sales are up, as customers see we are helping people. We now sell more hot food than before.”

At Fraser’s Budgens in Three Mile Cross, near Reading, the store donates to local food banks and soup kitchens to reduce food waste.

On the Isle of Wight, the Southern Co-op in Freshwater is successfully trialling a partnership with The Real Junk Food Project IOW. In just six months, more than 600 boxes of bread, pastries, fruit and vegetables have been diverted from waste and transformed into meals.

During half-terms, the number of donations and pick-ups are increased to support a drive that helps support families during the school holidays.