Sustainable independent retailer Hisbe is hoping to accelerate the reuse revolution by ending the sale of single-use coffee cups from January and calling on other retailers to join its campaign. 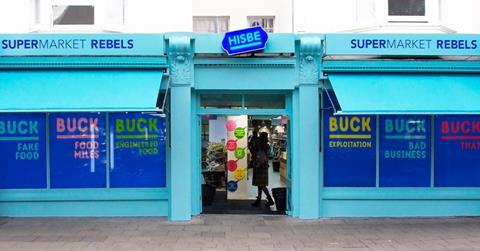 The Brighton-based store, which currently sells takeaway coffee in compostable cups along with compostable lids and cutlery, also hopes that the move will go some way towards improving consumer understanding about waste and recycling and changing mindsets associated with coffee consumption.

“The major coffee chains have created this incredibly flippant mindset that’s resulted in people feeling like they need to swig coffee wherever they go, even if it’s just a four-minute walk away, and then chucking their cups when they’re done,” Hisbe operations director Jack Simmons told C-Store.

“We thought that buying in compostable cups, which are made from a plant-based material, was a potential solution but actually what we’ve realised over time is that this solution is actually far from perfect.

“With most customers lacking composting facilities in their own homes and gardens, the cups are just being thrown into the paper recycling stream which isn’t correct either and is probably causing issues there.”

From January the store will only sell coffee in reusable cups, which shoppers can bring in or buy on site, or in china cups for drinking in its café.

“We’ll be communicating the change to shoppers in the run up to the ban and even if we get negative comments on social media it will be no bad thing as the negative comments will give us a chance to respond publicly and inform people about the reasons behind the change,” he said.

“The fact is that even the seemingly ecological solutions, such as compostable cups, are not perfect. The only perfect solution to reducing packaging waste is to drink coffee out of a re-usable cup or sitting down to drink in at a café or at home.

“At around £3 a cup, coffee isn’t exactly cheap either. What we’d really like is to drive a change where people think ‘actually I’ll just build 10 minutes into my day where I’ll sit down and enjoy a proper cup of coffee rather than just mindlessly guzzling it on the go’.

“Of course we appreciate that that’s not going to be possible or practical for everyone, but small changes really do add up in the long-run, especially if other retailers join us in a collective movement,” Jack added.

Hisbe also plans to start charging shoppers 5p for its small paper “produce bags” and 10p for paper carriers, but will reward shoppers who bring in their own bags and containers to refill with 5p off.

“We also want shoppers to understand that while paper bags can be recycled much easier than plastic, producing them is still a huge drain on our precious natural resources so paper isn’t perfect either,” he adds.

“There’s still so much education needed about reuse and recycling and what’s truly ecological and what isn’t. Hopefully changes such as the ones we are making can help to start driving the message home.”