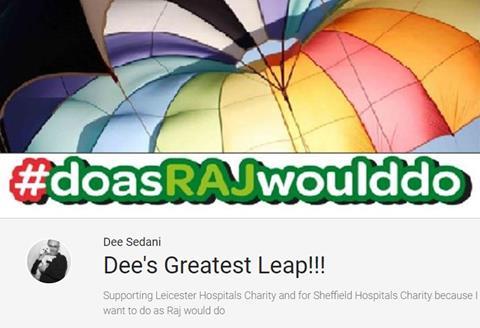 A retailer will be taking the plunge to carry out a skydive in honour of Raj Aggarwal.

Avtar ‘Sid’ Sidhu is to carry out a skydive in memory of Raj who passed away from Covid-19 in April 2020. He, along with fellow retailer Dee Sedani, pledged to jump out of a plane to raise money for Leicester Hospitals Charity and Sheffield Hospitals Charity in honour of “an amazing man and good friend”.

The skydive was originally supposed to take place on 26 November, however due to high winds on the day, it was pushed back to 3 December. The charity skydive is part of the #DOASRAJWOULDDO campaign set up in Raj’s honour. Dee, who was also supposed to do the skydive, has sustained an injury and has promised to carry out the dive at a later date.