Robinsons RTD teams up with The Hundred 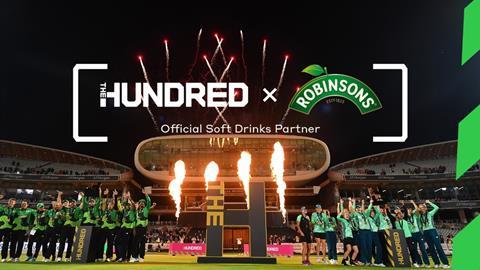 Britvic has announced that Robinsons Ready to Drink is the official soft drinks partner for The Hundred cricket tournament, kicking off in August. As part of a three-year deal, the partnership will include an on-pack promotion to further drive sales this summer and beyond.

From this week, Robinsons Ready to Drink will be launching its on-pack promotion across over 2million packs, giving consumers the chance to win tickets to the tournament every two weeks via a QR code. The promotional bottles, which feature a cricket ball design, will be the ideal drink to enjoy during the game and on the go, making it a must stock for operators this summer.

Phil Sanders, out of home commercial director at Britvic, says: “Robinsons Ready to Drink is proud to be the official soft drinks partner of The Hundred and to get families active this summer. There is a huge opportunity for retailers to continue to draw shoppers into the on-the-go sector, with over two-thirds of retailers agreeing they are seeing growth in impulse soft drinks sales (Britvic commissioned independent research, Newtrade Insight, November 2021), and over a third predicting their on-the-go ranges will exceed pre-covid levels [ibid]. With the tournament taking place from 3rd August to 3rd September, games will be broadcast on Sky and BBC, and audiences are expected to reach over 16 million, so a fantastic opportunity for Robinsons ‘Ready to Drink’ to target a broad range of consumers through its association and on-pack promotion.”

Robinsons will be supporting The Hundred partnership and on-pack promotion with disruptive POS, digital, and in-store activations. It will also include in-ground advertising (alongside other branded partners) during the tournament.

Since the launch of Robinsons Ready to Drink, the momentum continues with a value growth of +79%, growing ahead of the category (NielsenIQ RMS, Total Single Serve Drinks,Total Coverage L12 wks 26.03.22). The brand recently added a third flavour to the line-up with Blackberry & Blueberry. The new addition to the range contains no added sugar, and joins the Raspberry & Apple and Peach & Mango variants.