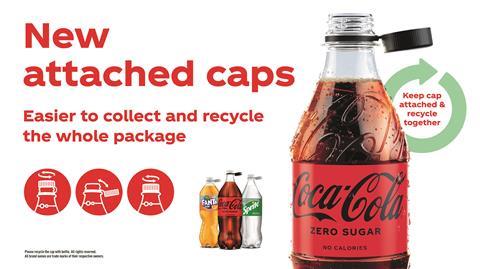 Coca-Cola Great Britain (CCGB) in partnership with Coca-Cola Europacific Partners (CCEP), has announced it is introducing new, attached caps to its plastic bottles, making it easier to recycle the entire package and ensure no cap gets left behind.

Production of bottles with attached caps will begin today at CCEP’s site in East Kilbride, Scotland, meaning that consumers in Scotland and the North of England will start to see new caps attached to 1.5l bottles of Fanta, Coca-Cola Zero Sugar and Diet Coke. The switch is set to be completed for all plastic bottles across CCGB’s range of brands by early 2024.

All of Coca-Cola’s bottles, including the caps, have been 100% recyclable for many years but not all are being recycled. Bottle caps are often discarded and littered. The new design means that the cap stays connected to the bottle after opening, so the whole plastic bottle and attached cap can be recycled together, reducing the potential for it to be littered while still giving consumers a positive drinking experience.

Working in partnership with CCEP, Coca-Cola is the first major soft drinks company to announce the switch across its entire range in Great Britain.

Coca-Cola has announced major initiatives both globally and locally to help create a “circular economy” for plastic, which are key to Coca-Cola’s ambition to create a World Without Waste. Last year CCEP announced that it had reached its target of using 100% recycled plastic – excluding caps and labels - in all its 500ml or smaller bottles sold in Great Britain ahead of schedule, helping to save around 29,000 tonnes of plastic per year.

The move also follows CCEP’s transition to Shrink to Board packs at the business’ Sidcup manufacturing site last year, alongside light-weighting of its aluminium cans, which are now 22% lighter than just two years ago.

CCEP is starting the changeover to attached caps initially from its bottling plant in East Kilbride, Scotland followed later this year by its site in Edmonton, North London and the rest of its sites in GB over the next 18 months.

Stephen Moorhouse, general manager at CCEP, Great Britain says: “This is a small change that we hope will have a big impact, ensuring that when consumers recycle our bottles, no cap gets left behind.

“The move is just one of the steps we’re taking as part of our This is Forward sustainability action plan, which targets six key social and environmental areas where the business has a significant impact and forms a key element of our 2040 net zero target. It’s also one of many steps we’re taking towards our global commitment, in partnership with The Coca-Cola Company, to help collect and recycle a bottle or can for every one that we sell by 2025, on our journey towards a World Without Waste.”

“As the world’s largest independent bottler of Coca-Cola, we recognise that we have a leading role to play in pushing innovation and design to produce more high-quality recycled plastic which can be converted into new bottles.”

“We are proud to be leading the industry in Great Britain, with production of the new attached caps to our plastic bottles first taking place right here in East Kilbride, following £32m in investment into the site since 2017.”

Seamus Kerrigan, operations director at Coca-Cola Europacific Partners in East Kilbride, says: “We are very proud to be leading the way as the first site in GB to start production of plastic bottles with attached caps. The milestone follows significant investment in our production lines to prepare for this – and other manufacturing innovations – to produce some of the most loved, well-known global brands in the most sustainable way possible, from right here in East Kilbride. Last year saw the introduction of on-the-go bottles made from 100% recycled plastic, and the transition from plastic to paper straws on Capri-Sun, the largest children’s juice drink brand, which is also produced here. This latest milestone is a huge achievement and I’m excited to see where we’ll go next.”

“The Government is committed to boosting recycling across the country with our new Environment Act creating a deposit return scheme for drinks containers, making manufacturers more responsible for their packaging, and putting in place consistent recycling collections.”

Adam Herriott, sector specialist, WRAP, says: “This great move from Coca-Cola Great Britain supports the on-going work with the UK Plastics Pact in trying to ensure that as much plastic packaging is captured and recycled as possible. In 2020 we saw the amount of plastic packaging being recycled increase from 44% to 52%. The small changes are what adds up to make a big difference and when it comes to recycling, the higher the quality of the material the better. We look forward to seeing more innovations in this area”.