Cadbury is running a promotion offering consumers the chance to win a ‘once-in-a-lifetime experience’ with a former Premier League player. 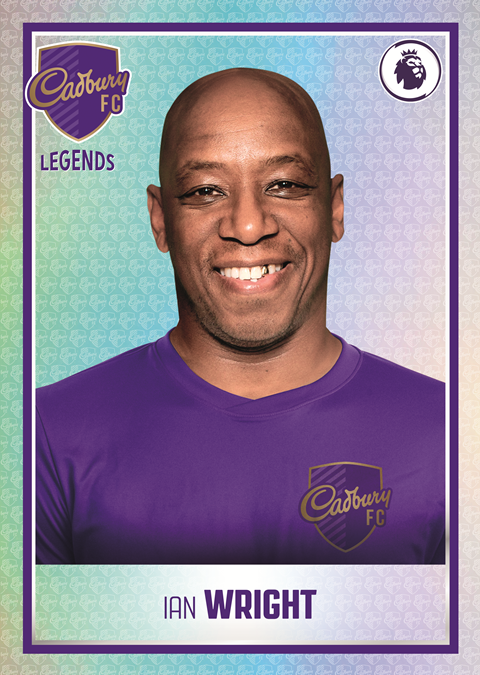 The Find A Shiny, Win A Legend competition will give consumers the chance to meet football icons.

Between 2 January and 31 March, shoppers who find a shiny sticker in packs of participating Cadbury products will instantly win an experience with the footballer pictured. Legends include former England internationals Ian Wright, Gary Neville, Michael Owen and Jamie Redknapp, along with former Republic of Ireland, Newcastle and Manchester City goalkeeper Shay Given.

If shoppers don’t find a shiny in participating packs they can visit legends.cadburyfc.com and upload a picture of the front of their pack with the Cadbury logo visible, and they too could be in with a chance of winning hundreds of other Premier League prizes. These include 50 pairs of tickets to Premier League games or any one of 2,600 Panini prizes, including 300 fully complete softcover sticker albums and stickers, 300 hardcover sticker albums and one of 2,000 boxes of Panini stickers.

The new campaign is the latest in a line of successful promotions introduced as part of Cadbury’s partnership with the Premier League. It follows on from the first Premier League Legends campaign which ran last year and offered consumers the chance to meet football legends including Thierry Henry, Jamie Redknapp and Gary Neville.

Pippa Rodgers, brand manager for Cadbury Dairy Milk, said: “As the many thousands of people who have collected football stickers over the years will know, the “shiny” is an iconic find in any pack. Thanks to Cadbury’s ‘Find A Shiny, Win A Legend’ promotion, the shiny comes with even more value.

“This year the promotion has been extended across an even wider range of Cadbury products, which will give shoppers more chances to win this amazing array of Premier League and Panini prizes.

“As the 2019/2020 Premier League season really heats up through the first three months of the new year, retailers can use the Cadbury Find A Shiny, Win A Legend campaign to capitalise on this increased excitement from football fans.”

Former England international Ian Wright said: “It’s very exciting to be turned into a shiny iconic sticker for Cadbury. I remember trying to collect these stickers for much of my childhood! I look forward to spending a day with the winner!”