Britvic is giving parents a chance to ‘reach for the stars’ with its new on-pack promotion running across its Fruit Shoot portfolio this summer. 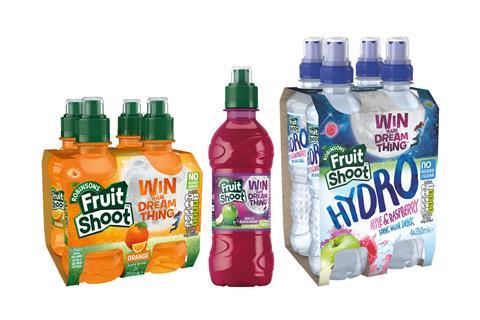 Launching as part of an integrated 2019 campaign, the promotion gives parents the chance to win a ‘dream thing’ for their kids in a bid to help retailers drive engagement during the peak summer sales period.

Available to convenience stores from early July, the ‘Fruit Shoot for the Moon’ activity encourages parents to find one of 10 golden moons printed on promotional packs*.

If they are unsuccessful, parents can then input an on-pack code online to enter a prize draw for two more opportunities to win. Fruit Shoot is also releasing a pop track into the UK music charts this summer to support the campaign

Rachel Phillips, OOH commercial director at Britvic, said: “We have spoken to a number of parents in the run up to our latest campaign, and the feedback we have received is that Fruit Shoot really understands their kids’ passions. The ‘Fruit Shoot for the Moon’ promotion is very different to what people have seen in the past which makes it intriguing to them as the parent and also exciting for their children.

“Fruit Shoot is playing a starring role in making dreams come true. It’s important that convenience stores are stocking singles for on-the-go occasions or for inclusion in healthy snack deals but also multipacks for those that are visiting for a top-up shop of summer essentials, particularly within the school holidays as it is such a key time for retailer’s sales with children drinking more soft drinks.”

The fully integrated campaign will be supported by media across radio, TV and video on demand, while also continuing Fruit Shoot’s partnership with Netmums throughout July and August.

The new ‘Fruit Shoot for the Moon’ promotion will run across single and multipacks of core Fruit Shoot, Hydro and Juiced throughout the school holidays.

*Peel back label on single serve packs / on the board of multipacks to find a golden moon.