Robinsons gets ready for Wimbledon with new on-pack promo

Britvic is hoping to help convenience retailers drive sales this summer with a new on-pack promotion across its Robinsons Refresh’d range. 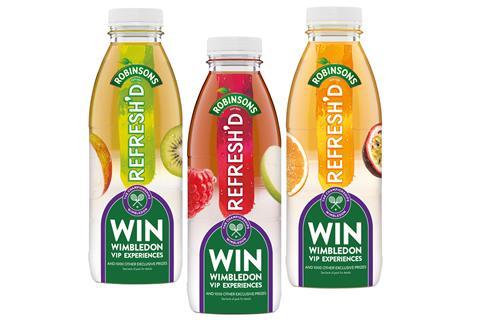 With promotional packs rolling out now until mid-June, shoppers will have the chance to win Wimbledon-themed experiences – from branded towels to VIP tickets to a tennis match during the tournament.

Celebrating the brand’s 84 year association with Wimbledon, Robinsons is also investing in a £3m campaign over the summer months, which includes a TV campaign going live at the beginning of May as well as in-store, radio and social media activations.

Running across all three flavours in the range – Raspberry & Apple, Orange & Passionfruit, and Apple & Kiwi – shoppers can scan the on-bottle QR code on each pack with their phones for a chance to win. They will then be asked to answer one question and those who answer correctly will be entered into a weekly prize draw.

Rachel Phillips, out-of-home commercial director at Britvic, said: “Robinsons Refresh’d is perfectly placed to help drive summer sales, and the Wimbledon tournament is watched and celebrated across the country. That means our on-pack promotion for shoppers to win Wimbledon themed prizes will drive brand awareness during a key seasonal peak for soft drinks. With Robinsons Refresh’d available in 500ml bottles including price-marked packs, it is a great option for retailers to include in meal deals or as part of a picnic offering – making sure the bottles are chilled so that they can be enjoyed straight away.”