The Association of Convenience Stores has urged the government to exempt small stores from its proposals for a Deposit Return Scheme in England and to limit collection methods to Reverse Vending Machines. 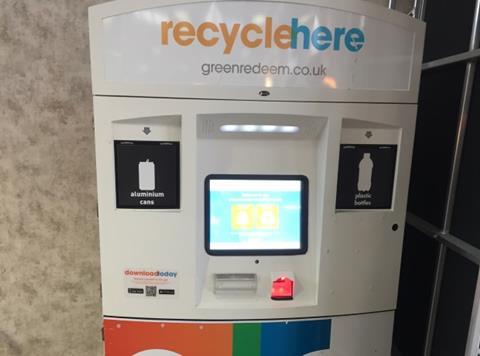 The ACS has responded to three government consultations, all of which closed this week, on introducing a Deposit Return Scheme (DRS), reforming the UK producer responsibility system, and introducing a plastic packaging tax.

The government DRS consultation looked at two options on how a DRS could work in England: an ‘on-the-go’ model which would only include containers less than 750ml in size and sold in single format containers, and the ‘all in’ model which would be designed to also capture larger drinks containers.

The ACS’ submission raises concerns about the impact that the introduction of a DRS would have on small shops, particularly regarding their role in taking back containers.

ACS chief executive James Lowman said: “Retailers are concerned about the introduction of a deposit return scheme, including practical issues which must be considered including hygiene issues, limited space to store dirty bottles, pressure on staff and the increased queuing times that their customers would face.

“This is why we have called on the government to ensure that if they do introduce a deposit return scheme, that it works for small shops, by only having drinks containers taken back by reverse vending machines, taking a more strategic look at where return points should be located rather than mandating every retailer, exempting stores which are too small to facilitate a DRS, and targeting the scheme at on-the-go packaging.”

The Scottish government last week outlined its proposals for a DRS, which will be introduced over its parliamentary term. Under the plans, which will not exempt small stores, retailers would be required to collect drinks containers returns over the counter if they do not install Reverse Vending Machines.

Responding to the consultation on plans to reform the packaging producer responsibility system, the ACS called for costs of the regulation to be applied at a single point further up the supply chain where there is more influence on changing packaging decisions.

Under the existing packaging responsibility system, only businesses which have a turnover of more than £2m and handle more than 50 tonnes of packaging are required to comply. The ACS argues that lowering the current threshold would place significant administrative burdens on small retailers in calculating how much packaging they are handling.

“The current system requires businesses to conduct complex calculations, then to buy proof that they have recovered the packaging they are obligated to have recycled,” Lowman said.

“We welcome the government’s proposals to instead place the costs of recycling further up the supply chain, so that heavily packaged products attract greater costs that have to be borne by all wholesalers, retailers and ultimately consumers, by with the bureaucracy of making these calculations removed.”