Three shops closed in Northumberland due to selling illegal tobacco 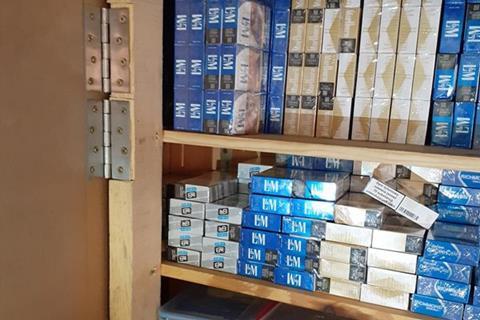 Three shops in Ashington that were caught repeatedly selling thousands of pounds worth of illegal tobacco have been ordered to temporarily close by magistrates.

This came after an investigation by trading standards officers from Northumberland County Council, who visited the sites for ‘test purchases’, seizure of illegal tobacco products, and warnings.

The shops continued to sell the products and were therefore ordered to close.

On 20 January a closure order was imposed against Ashington Fruit and Veg Ltd, on Woodhorn Road, Ashington, which was closed for 3 months until the 20th April 2022.

At this court hearing, the council was also granted two temporary Closure Orders on other Ashington businesses - M & A Mini Market Ltd and Euro Express - pending a full hearing on Thursday 27 January.

On 27 January, M & A Mini Market Ltd, 35a Station Road, Ashington was ordered to close for one month. An estimated total of £1,600 worth of tobacco was seized from the premises in three visits over three months.

Euro Express, 19 Lintonville Terrace, Ashington, was ordered to close for two months. A total of approximately £4,000 worth of illicit tobacco hidden in a wall at the premises, was seized during three visits.

On 24 November, two visits were carried out on the premises within an hour. At the first, products were seized, but officers returned just one hour later to find that they had already restocked, and this tobacco was also seized.

Northumberland County Councillor, Colin Horncastle, cabinet member with responsibility for community services said: “I’m pleased that the magistrates have supported the actions of the council and in doing so agreed to impose closures to prevent the businesses from continuing to trade. I hope this sends out a strong and clear message, that we will not tolerate this criminal activity and there is no hiding place.

“Closing a business is not a decision we take lightly, but despite being under criminal investigation for previous offences of selling illicit tobacco, secondary raids found they were once again selling the black-market products. These business owners had no respect for the law, or the harm they were doing, especially to the health of the younger members of their community, and now they will pay the consequences of their illegal actions.”

“We must reduce the harm caused by the sale of tobacco and I would urge members of the public to continue reporting such activity so that we can take the necessary action.”

Northumberland County Council has been backing the Keep it Out campaign from Fresh (the Regional Tobacco Control Programme) which has generated thousands of pieces of information about illegal tobacco to help trading standards take action.

In December of last year, two men who smuggled 117 million cigarettes, worth £36m, into the UK were jailed for more than 14 years after their encrypted messages were accessed by investigators from HM Revenue and Customs (HMRC).

Carmine Di Franco, assistant director for the fraud investigation service, said: “In the fight against serious organised crime, the Encrochat operation was the largest and most significant law enforcement activity ever mounted in the UK. The recovery of messages helped HMRC to dismantle a significant gang involved in smuggling and supplying illegal cigarettes.

“We are determined to cut off the funds that are the lifeblood of serious crime in the UK.

“We encourage anyone with information about the illegal sale of tobacco to report it online or call the Fraud Hotline on 0800 788 887.”