Raj Bathia opened the 6,500sq ft Battersea General Store in July 2017. Located within the £9bn regenerated Battersea Power Station, Raj has described it as “your global local store”, owing to its plethora of locally-supplied products - complemented by Nisa-delivered lines - and cosmopolitan outlook. The store has a mouth-watering foodservice offer, eye-catching alcohol fixture, and utilises cutting-edge technology. Raj, who owns another store in nearby Chelsea Bridge Wharf, says sales are “very high” and increasing monthly. 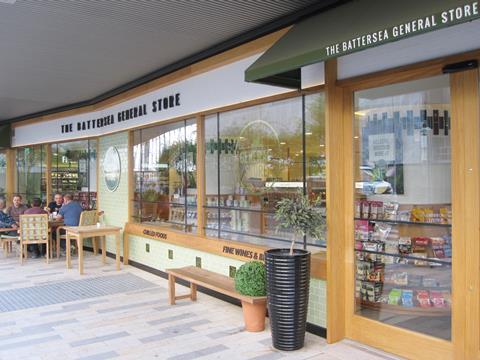 Raj says his history is in food to go, including cafés and delis. “I have more experience in it than your average grocery retailer”.

The store offers Illy coffee from the deli. “They [Illy] come in every other week to adjust the grinder and make sure the machine’s all perfect,” he says.

They also serve fresh orange juice, bake-off – croissants and pastries and so on – waffles, pretzels, bagels, baguettes, ciabattas, sandwiches, all variety of salads including meat and quinoa, and hot food including pastas, risottos, rice, chow mein and chicken noodles, all served from biodegradable containers.

All the deli selection is prepped on site and offered as both serve-over and pre-packed options.

Most of the produce comes from nearby Covent Garden market, with about 5% of fruit and veg supplied by Nisa.

Raj works with a number of local producers, including Pollen + Grace (ready meals and salad boxes), Pet Pavilion, local juice and cheese suppliers, and regional suppliers such as Ginger’s Kitchen.

At first they sourced about 40% of stock from Nisa, now it’s about 20%. “We have a wide demographic in terms of customers, who teach you quickly what they want. It’s up to us to respond,” Raj says.

The impressive alcohol fixture includes “very fine wines”, ranging from £8 to £2,000 per bottle, beers and ales from a number of nearby breweries, including Wimbledon Brewery, Sambrook’s Brewery, Mondo Brewing Company and Doghouse Distillery.

He recently extended the spirits range to 375 lines, including a huge range of Scotch whisky and craft gins.

Despite a relatively affluent customer base, the store still has to focus on value, Raj says. “Even the richest person in the world has so much information. They know the prices in Sainsbury’s and Tesco.”

A recent weekend promotion of Berry Bros’ prosecco, at ‘two for £20’, sold extremely well. “Customers want value – but it has to be on the products they want.”

Technology includes Nisa’s Evolution epos, a cutting-edge camera system, and fingerprint technology at the tills. Raj is interested in shelf-edge labelling, but would like to see it tested more. “When technology works it’s amazing, but when it doesn’t you really have an issue,” he says.