Chaz Chahal’s aim to create the perfect store for a village community has been a long and winding road, but the resulting Forge Shop shows that hard work pays off 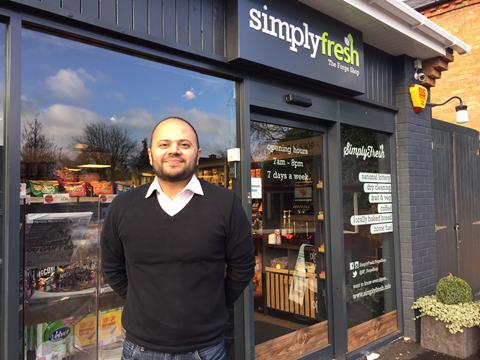 What makes the difference between a good store and the best store? Hard work and determination “bordering on OCD”, according to Simply Fresh retailer Chaz Chahal.

Chaz certainly needed plenty of determination when he took on the project to transform an outdated 300sq ft traditional newsagent into a modern store three times the size, now known as The Forge Shop Simply Fresh.

“Buying a site isn’t difficult, but finding the right site is what’s unique,” Chaz explains, describing how his journey began at the site in the small village of Inkberrow, Worcestershire. “I had set criteria that I wanted my new store to meet. I wanted a captive audience, on a main road, a freehold, something performing well, but which I could take to the next level. When I saw the Forge Shop, it ticked all the boxes.”

The actual build took six months, but much of the difficulty was in the planning. The store is in a conservation area, which meant Chaz had to deal with many planning restrictions and he knew he would need as much local support as possible.

“I knew that working with the community would be essential to making this project work. Persuading the parish council [to allow the build] was not easy as the old shop was in a conservation area and any changes would be heavily scrutinised. However, my passion for retail, energy and plans wowed the parish and my promise to keep the store true to its surrounding environment was key to gaining their support.”

As an example of the types of planning restraints enforced, the original build had an empty two-bedroom house at the back of the store and the plot had to retain that dwelling. Therefore, a two-bed flat was built into the back half of the first floor in the new build.

With a background in technical engineering, it’s not surprising that Chaz had a very hands-on approach when it came to the design of the building. When he was able to take matters into his own hands, he would. He even designed the coffee area and fruit shelving unit himself to make the most of every inch of space.

It was important to Chaz that he gave the store a farm store look as he knew this would be appropriate for the area. He also wanted to “do the right thing” in continuing to provide for the community throughout the build so he kept the store open the entire time. He even turned the stock room into a makeshift store while the new store was being fitted out.

Several features have ensured the memory of the old store remains, however. The cart out front of the store has been kept, while a canvas overhead as you walk into store shows black and white photos of the store through the ages. What’s more, he has retained the three members of staff who worked there previously, now employing 15 people part time.

After building close connections with the community and council during the planning of the store, Chaz has ensured his good relationship with the community have continued now the store is actually up and running. He works closely with the primary school down the road; three of the children from the school were chosen to carry out the official ribbon-cutting at the community day held to celebrate the opening of his store.

He sees it as time well spent as his shoppers are a mix of young families and affluent elderly residents. As such Chaz tends to stock own label good-value items, then a good range of premium labels to suit his  clientele’s budgets.

The main focus of the store, though, is on fresh, food for tonight and food to go and Chaz has devoted the first aisle of the store to these missions, investing in 25 metres of state-of-the-art energy-saving refrigerators.

The food-to-go offering includes Independent-branded sandwiches, of which he sells 35-40 units a day, along with a hot food offering through Rustlers and Uncle Ben’s microwavable products. A microwave is placed next to the coffee-to-go area and proving particularly useful for all the tradesmen currently working in the area.

The fresh fruit and veg range has been extended since opening as it “flies out”, says Chaz. He sources much of it locally, with deliveries two to three times a week.

Indeed, locally-sourced SKUs can be spotted throughout the store, including Cooper’s sausage rolls and locally-baked bread and cakes.

It’s an area he intends to extend. Says Chaz: “This year I’d like to make better use of the cart outside the store and invite local producers to showcase their products. I think it would be really good for the community, on Saturdays, to have the local butcher offering a hog roast or get bakers to hold cake stalls.

With the wide range of fresh and high-quality produce the store could be in danger of appearing to sell only premium products. To avoid this, Chaz stocks pricemarked packs wherever possible to create an image of value and ensure shoppers trust they are paying the correct price.

The premium look is in part due to the store’s lighting, and Chaz says he has been amazed by the amount of knowledge he’s gained on the subject of LED lighting. After speaking to the experts he has found just the right lighting to create a warm ‘inviting glow’ throughout the store.

It’s not only lighting that Chaz knows about; he makes good use of Costcutter’s CPOS system. He inputs every item into the database himself. He tells the system the lowest number of each SKU that he wants to have on shelf at all times and the system automatically populates purchase orders. Thanks to his meticulous work with the system, it keeps stock levels exactly where they should be. This allows him to generate a full order in minutes without even being on site.

“Most of my time is spent in the back office. I’ve created all the local suppliers as suppliers within the system and manually input all the product details and rrps. I’ve realised through experience that the more you put into an epos system, the more you get out of it. Many retailers own an epos system but very few fully utilise its power.”

Another time-saver is the two self-counting tills. “As soon as I saw them, I wanted them no matter what they cost,” he says.

The two cost £3,000 but the investment has been well worth it, he says, for the time saved not having to balance the tills at the end of every shift. He is also able to access tills remotely so he can see what every till in every store (he also runs two Costcutter stores) is scanning live.

Chaz admits that opening the shop has been a learning experience. “I now subscribe to the view that convenience retailers are entrepreneurs,”he says, “because having the vision, the conviction and the investment to transform a small old, tired newsagent set in a conservation area, into a modern convenience store while maintaining a farm/deli shop look, has been achieved.