Sam Coldbeck’s Humberside store is benefiting from a host of new housing developments, and is adapting to meet the needs of both new and existing customers 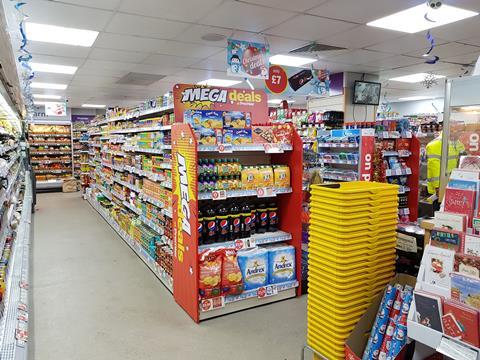 Change is afoot at Premier Wharfedale in Hull. A closed-down school at the back of the store has been developed into bungalows for people that need assisted living, while 169 houses are being built directly opposite the shop. At the same time, the nearby Preston Road housing estate - which store owner Sam Coldbeck says is probably the biggest social housing estate in Hull - has been partly demolished because the houses are being upgraded.

“All around us we’re surrounded by building work, but the future is looking the best it’s looked for a long time,” grins Sam. In fact, turnover is already up 11% year on year. “We keep saying we hope the new residents will spend as much as the builders. They come in in the morning, lunchtime and evening. We’re picking up lots of business from them.”

Never one to miss an opportunity, Sam has been quick off the mark in promoting the store to potential new customers. “As new residents are moving in, we’re sending them a ‘welcome to the area’ flyer and telling them about the shop and opening times, and making sure we’re in contact with them as early as possible. We’re also doing a lot on Facebook - targeted posts and boosted posts telling people about us. We’re targeting the bungalows and asking if they’d like deliveries and sending them the message that we’re happy to come to them if they can’t get out. In the snowy and icy weather we also send them flyers offering assistance.”

Key categories: hot food to go and off licence

Community work: Raised £3,150 for local hospice Dove House over the past 18 months

The shop’s Facebook page has been used to highlight its hot food offering, which comprises sausage and bacon sandwiches, cheese turnovers and Chicago Town pizza. The store has recently changed its hot food prep times to fit in better with those on early and late shifts. “We used to get on-site at 5.15am,” says Sam. “But we’ve got a lot of people locally who need to be at work at 6am and so there were a lot of customers we were missing out on who would come through the door between 5.30am and 5.50am, but the sausages were still in the oven.”

So now the morning staff come in at 4.30am and by the time the store opens its doors at 5.30am there’s a tempting array of hot food and coffee waiting for customers. “5.30 is one of our busiest times of day. We’ve got queues of people coming in for their papers, drinks and sandwiches for the day. We’ve advertised through social media to people who didn’t necessarily know we were there and made it a constant point that we never open without hot food being available.”

Sam has also capitalised on the anti-social working hours of many of her customers by extending the store’s alcohol licence. “Because our licence didn’t start until 8 in the morning, customers would come in after a shift at 5.30am-6am and they couldn’t get a drink. Also, those who wanted to buy [alcohol-based] presents for people in the office couldn’t and they were puzzled as to why.”

But applying for the licence extension wasn’t plain sailing. “It was straight away met with the council saying they didn’t think they could allow it, it was really difficult,” she says. Eventually, they found success through agent Licensing Matters. “Sales haven’t increased massively - we might get the cost of the licence back over the next 10 years. The biggest difference it’s made to the shop is that it looks inclusive now from 5.30am and we don’t have to have the lights off and shutters down in alcohol section.”

And the extended licence isn’t the only change the alcohol section has undergone. “In March last year we moved tobacco into drawers and replaced it with a spirits display,” says Sam. “We’ve tripled the size of spirits, added spotlights and then LED strips. It was a big investment at £2,500-£3,000, but when you take out a cigarette gantry you’re not going to get any sponsorship or any help from anyone else so you’re left with a huge space that you have to do something with.”

Sam concedes that she isn’t expecting a quick win. “It’s a long-term investment, you’re not going to make it back in a couple of months. We have got better margins on spirits now than we used to. It was as low as 12-13%, now it’s 20% on many lines. Done right, we can get the turnover on spirits.”

Sam is working closely with suppliers to increase alcohol sales. Diageo came in for a Ciroc tasting before Christmas, and Sam promoted this heavily on Facebook, letting customers know that the spirit would be available at a promotional price. “It’s all about looking for different ideas and giving customers something they aren’t getting from the generic multiple stores,” she says.

Another way that the store differentiates itself is through sourcing local produce. Bread, cakes, eggs and ales are flagged up as supporting local suppliers. One line that has caused a stir with shoppers is the local rugby club Hull Kingston Rovers’ official beer from Great Newsome Brewery, which launched in December. “We’ve got so many Kingston Rovers supporters in here,” says Sam, who has promoted the Kit Room (KR) craft beer on Facebook. “We can see by the amount of people talking about it on social media that it really matters to people. You wouldn’t find anything like that in a local supermarket.”

The store’s support of the local community goes far beyond stocking local products, though. Sam believes that the area suffers from low morale. “Hull’s a bit of a standing joke to the rest of the country,” she says. “I’m proud of the city and I think it’s a shame that a lot of people in Hull don’t believe in themselves. Just because there are some bad apples in the community it’s not worth wrecking the neighbourhood.”

She believes that, as a convenience retailer, she is responsible for helping to turn things round. And that means taking a no-nonsense approach to illicit trading. “What we can’t do is give the illicit trade a leg-up by making it easy for them,” she says. “We give out flyers to people, which advise them to make sure they know what they’re smoking and buy from a reputable retailer. It puts the message across that we do not sell illicit tobacco, because we’re responsible retailers.”

People have even come to the store to report crimes. “As the police are more and more pushed and budgets get put back, retailers are the one constant in the community,” says Sam. “We’ve had people bringing in letters to say the house opposite is selling tobacco from their shed. Straight away we pass it on to Customs and let them know what’s going on and the police will work with Trading Standards. The way I see it, if you don’t report it, it’s not happening statistically.”

She has recently teamed up with PCSOs, local retailers and a charity called The Rank Foundation, to launch Business Watch. The group’s aim is to reduce theft and anti-social behaviour and make sure that when there is trouble, customers feel they can report it.

Sam genuinely believes that working alongside other organisations is the way forward and is constantly trying to strengthen links with local authorities. “All the time it’s about building bridges and saying: ‘We’re willing to work with you, will you work with us?’,” she says. “Hull City Council and Trading Standards know that they can come here and we’ll work with them. It’s about working with these groups and not thinking ‘They’re out to screw us over’. We need to work with these people to benefit the community.”