Snickers teams up with Jürgen Klopp for football ad 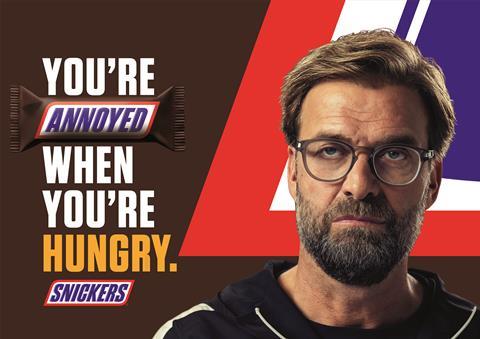 Liverpool FC manager Jürgen Klopp is starring in a football-focused ‘You’re not you when you’re hungry’! Snickers ad. The creative, which was filmed in 2019, shows the two-time men’s coach of the year playing table football. Hungry and frustrated by the lack of tactical nuance on display by the miniature football figurines, the ad’s protagonist protests in comic fashion against the perceived injustice of the game.

Speaking about the partnership, Jürgen Klopp said: “My family and I have always loved Snickers, and it’s hard for me to turn down a game of football, so I was really looking forward to this partnership from the very first moment.”

Mars Wrigley UK marketing director Kerry Cavanaugh said: “Jürgen brings the same energy and passion to the Snickers campaign as he would to a top of the table clash, and that’s why he is the perfect person to front the next installment of our hugely popular ‘You’re not you when you’re hungry’ series.”