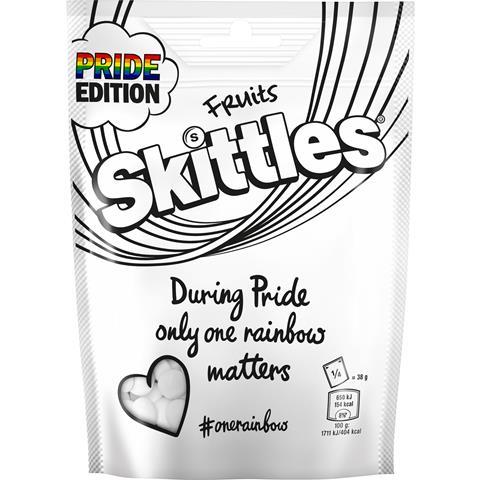 For more than half a decade Mars Wrigley has given up Skittles rainbow colours in order for Pride’s rainbow to take centre stage, acknowledging that it is the only rainbow that matters during the LGBTQ+ celebrations.

This year, Mars Wrigley is continuing its commitment to Pride with a new campaign, ‘Recolour The Rainbow’, which will see the brand re-colour four iconic LGBTQ+ images - restoring them to full colour for the first time ever, and ultimately bringing new life, visibility and celebration to each image.

As in previous years, limited-edition Skittles sharing packs will turn black and white as the brand gives up its rainbow colours to the LGBTQ+ community. The colourless packs are available across grocery and impulse nationwide, remaining on shelf throughout the summer to coincide with scheduled Pride celebratory events.

In the current climate, this year’s Pride is expected to be celebrated in different ways, not just parades, but in smaller settings including picnics, barbecues and parties. The Skittles Pride packs are designed for sharing at these occasions and as a trusted brand within the LGBTQ+ community, ranking No.2 on the list of brands committed to Pride [Gay Times “Pride Over Pinkywashing” Report], consumers will look for this format in retail.

This year’s Skittles Pride campaign is being supported with a more than half-a-million-pound investment that will focus on experiential initiatives and the promotion of togetherness. In addition, there will be in-store activations to support retail customers and drive awareness of Pride and the ‘Recolour The Rainbow’ campaign partners, Switchboard, Queer Britain and Gay Times.

For the campaign, the expertise of renowned colourist Dynamichrome was utilised to re-colour the four LGBTQ+ archive images. The featured images are a 1971 Gay Liberation Front protest in Trafalgar Square; a Lesbian Strength March in 1985, including prominent activist Femi Otitoju; and photos capturing Pride events held in New York City in the 1970s. The images will be donated to Queer Britain, a charity working to establish the first national LGBTQ+ museum.

In addition, the campaign features a call to action asking the UK’s LGBTQ+ community and allies to submit their black and white historical photographs of Pride’s past, with a number of community photo submissions handpicked to be re-coloured and donated to Queer Britain.

Skittles is also supporting Switchboard by promoting its number and service across Gay Times in addition to creating a zine of Switchboard’s history.

Victoria Gell, Skittles portfolio director, says: “With this new campaign, we are taking our rainbow messaging one step further and restoring colour and awareness to a community that continues to grow its voice.

“Sharing memorable moments is part of our brand DNA. Skittles Pride packs are stand out on shelf and we are helping support our customers with disruptive in-store activations designed to drive awareness and sales throughout the summer. Skittles is a brand that resonates with younger shoppers driving +14% brand penetration with under 28-year-olds [Kantar Worldpanel- Total market, 52 weeks ending 14th June 2020]. Pride is highly relevant with under 25-year-olds so this offers retailers an opportunity to drive relevance with the Gen Z consumer whilst generating awareness.”