Kellogg’s is mixing up one of its biggest breakfast brands with the launch of Coco Pops with white chocolate. 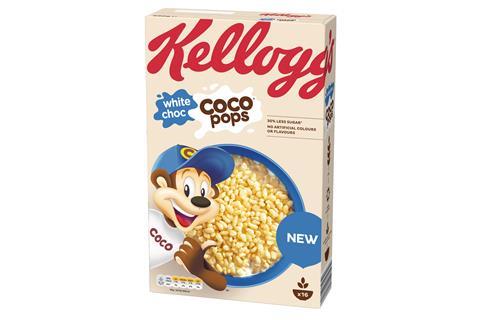 The introduction of the white choc version marks the first time the recipe of the company’s well-known chocolate cereal has been altered. As well as featuring a different taste, the new variant (rrp £2.99 / 480g) also contains 30% less sugar than the original.

“In response to our fans, and the growing desire for white chocolate varieties of popular foods, we wanted to see if it was possible to create a white chocolate Coco Pops that tastes as good as the original,” said Katy Bailey, Kellogg’s UK brand manager.

“Our food developers have succeeded and for the first time in the cereal’s 59 year history a white chocolate version will hit the shops.”

To promote Coco Pops White Chocolate, Kellogg’s is introducing a new brand mascot: Nula the Narwhal, who will feature alongside Coco the Monkey in a new advertising campaign.