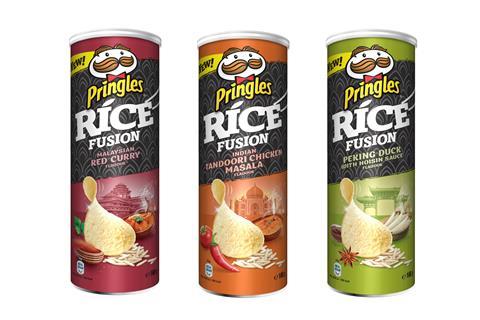 Pringles is set to launch its biggest innovation in four years, with a new rice-based chip made with eastern-inspired flavours.

Pringles Rice Fusion marks the first innovation for the brand since Pringles Tortilla, which became the biggest launch in the chip category in 2015 (IRI w/e 29th December 2018).

Available from next month, the Rice Fusion range will consist of three variants: Malaysian red curry; Indian tandoori chicken masala; and Peking duck with hoisin sauce (rrp £1.99 per 160g can).

The launch is based on Kellogg’s insight that shows 53% of savoury snack buyers buy more when they see new flavours, with the Fusion line-up being made with less saturated fat and less salt than the core Pringles range.

The new products will be supported throughout 2019 with a £3m investment in exclusive in-store POS, eCommerce, digital, TV and out of home advertising.