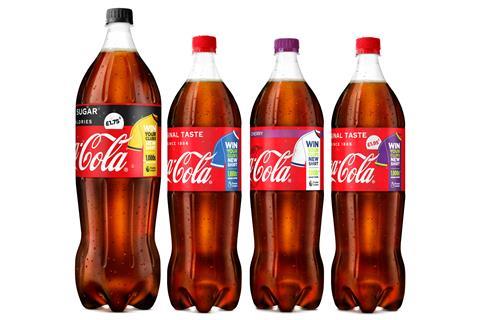 Coca-Cola European Partners is helping football fans enjoy a matchday experience at home by offering them the chance to win their favourite Premier League team’s new club shirt, as part of its latest on-pack promotion.

Running until October across selected packs across of Coca-Cola original taste and Coca-Cola zero sugar, the on-pack will giveaway club shirts across all 20 Premier League sides. Shoppers will be able to enter an online prize draw with every purchase to be in with a chance of winning.

The promotion will be supported by a multi-million pound consumer marketing campaign which includes radio, digital activity, out-of-home advertising, a partnership with Sky, and point-of-sale materials.

Associate director partnerships & sponsorships at Coca-Cola European Partners GB Paul Hiskens, said: “The Premier League is enjoyed at home by millions every week, plus many of those fans will be missing the matchday experience of visiting their team’s stadium, which is why we want to help them recreate the ‘home end’ atmosphere in their own homes.

“Watching football at home presents a £1.4 billion opportunity to retailers each year, which we expect to grow in 2020/21 as many fans will be watching the game from home, unsure when they will return to stadiums. This coupled with the fact that large PET bottles and multipack cans are seeing double-digit growth across grocery and convenience outlets, means this on-pack promotion presents a huge opportunity for retailers to create some excitement in store and grow their sales over the coming months.”