Mars Petcare UK is aiming to keep consumers and their pets smiling this season with two new on-pack promotions from its Pedigree and Dreamies brands. 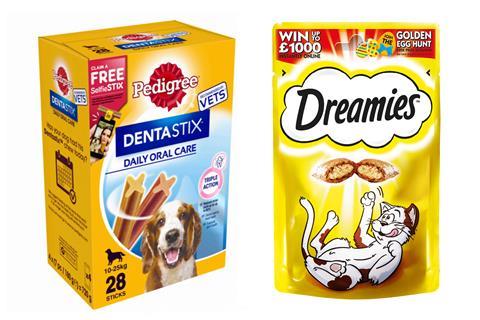 Kicking off this month and running until 1 July, Pedigree Dalily Dentastix are featuring in their first on-pack promotion which gives shoppers a free Pedigree Selfie Stix and a chance to win £1000 for every pack they buy.

The promotion is running across the convenience channel and will be supported by half a million pounds of above the line investment, which will be split across in-store, digital and social media platforms.

Promotional packs of Pedigree Dentastix are available to all retailers now at a promotional price of £5 per pack of 28.

For cat owners, Dreamies is also running an on-pack promotion featuring a Golden Egg activation. The promotion gives owners the chance to win more than 100 instant cash prizes comprising of 4 x £1,000, 100 x £100, plus a chance to win £1,000 in a prize draw.

As well as supporting the campaign with in-store displays, the Golden Egg activity will also be promoted online through video and social media content.

Promotional packs of Dreamies 60g Core Favourites selection are included in the promotion which runs until 19 May. The range is available to stores now at a promotional price of £1.