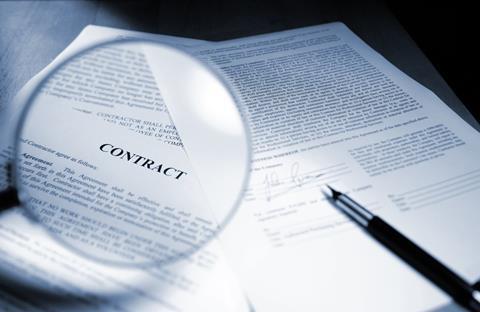 I feel like saying I’ve given out advice on contracts more than I’ve had hot dinners. Not quite true though. What I do always advise is, look for two things: how long is it for and what are the penalty clauses?

I had a pleading email from a retailer who said he was being threatened with court action over a £39,000 exit bill from a symbol group. I am going to keep all parties anonymous here.

When I got in touch with the symbol group in question they said they had in fact written twice to the retailer. They had also visited the store. The retailer had joined last summer and had an expensive refit, paid for by the group. The retailer then promptly sold the store, without telling the group, to another individual. He then ignored all correspondence until a legal letter was sent.

At which point he contacted me. Which smacks somewhat of attempted manipulation by trying to involve the press. I am very happy to take on difficult subjects but, in this case, he was made fully aware that the contract didn’t transfer (indeed it would have been very foolish of the symbol group not to have pointed this out to him at the outset).

The group said that it had become a legal matter because the retailer was unwilling to compromise in any respect and just wanted to walk away from the contract and the exit fees.

I did suspect the retailer had been economical with the truth when I twice asked him to forward the threatening letter and he didn’t.

Expensive lesson but no doubt the cost of the refit was reflected in the selling price.