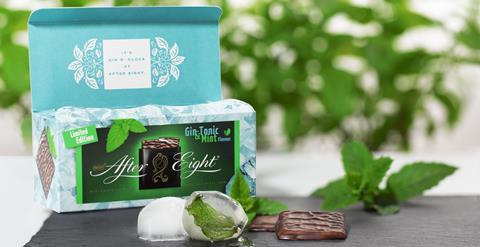 A limited edition After Eight Gin & Tonic & Mint will hit shelves from September.

Debbie Bowen, senior brand manager for After Eight, said: “Gin has rapidly become the nation’s spirit of choice, so what could be better than combining the flavours of our favourite tipple with the delicious mint fondant and dark chocolate that has made After Eight so popular for almost sixty years.

“After Eight Gin & Tonic & Mint is a fresh, zesty twist on a classic, and we believe it will prove to be a very popular addition to the range. Gin O’Clock has officially arrived!”

Established in 1962, After Eight is crafted with 100% natural peppermint oil and is free from artificial colours, flavours and preservatives. The new line will be available from September 7 onwards, until Christmas.