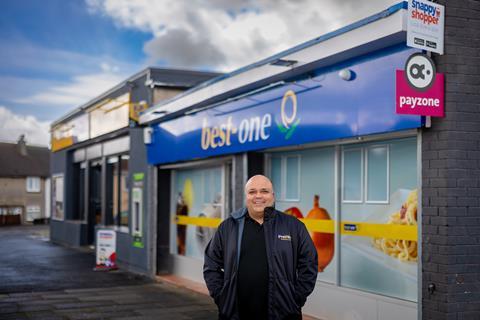 Imran Akhtar, owner of Best-One Hurlford in Kilmarnock, Scotland, is closing the doors of his shop to customers and creating a delivery hub after delivery sales hit £1m.

However regular store customers won’t be left in the lurch as he is also opening a Premier store next door to the Best-One.

“I’ve built an extension on the back of the Best-One,” said Imran. “That’s just going to be a delivery hub.”

He is investing £40,000 in the hub, which he predicts will result in 25% incremental growth. He has also built a new store adjacent to the Best-One, which will open as a Premier in the next couple of months.

He made the decision to set up a hub having built up average sales of £55,000 a month over the past 18 months since joining the Snappy Shopper platform.

But Imran claims that the platform alone is not what has guaranteed his success.

“To be honest with you, it’s not Snappy, it’s the work you put in yourself,” he told Convenience Store. “They don’t see this behind closed doors - I work 18-20 hours a day. Anybody can sit on a keyboard and see the figures, but they don’t know the methodology we use behind the success.

“I’m in control of every part of the business. If there’s a product availability problem, we don’t let the customer know it’s not there, even if we need to pick it up from another supermarket, we’ll pick it up. I was working my arse off day and night to make sure everything is 100% - the availability is there, the drivers are there and punctual.”

Since signing up to the Snappy Shopper platform 18 months ago, Imran has been processing on average 730 online transactions per week. It is also increasing customer loyalty with 90% repeat customers ordering through Snappy.

Despite these impressive figures, he is frustrated with Snappy Shopper because they have allowed another retailer just 100 yards away to use the platform.

“They’ve brought them on, but they’re not turning over the business I am,” he fumed. “I had a big argument with Snappy and asked why are you bringing it on? I put my hard work into it. I spent my own money marketing it. At that time Snappy funding wasn’t available for any marketing, I did it all myself - every day putting out handmade leaflets. I printed off my own banners at £20 a banner - I printed out 40 at the start when I took it on because it was quiet. If you promote it too much, the problem is with Snappy they’re bringing on anybody and everybody. The market’s already diluted.”

Responding to Imran’s comments, Dael Links, head of B2B marketing at Snappy Shopper, said: “We are aware of Imran’s concerns regarding competition and are working with him to address them. At Snappy Shopper we are passionate about supporting local retailers and increasing the number of shoppers supporting their local high street. Our data shows that onboarding multiple retailers in an area means higher customer awareness of Snappy Shopper stores and does not negatively affect the performance of the original retailers on the platform. Since joining in January 2021 Imran has seen consistent monthly revenue at circa £60,000, hitting his best week on the platform just last week with an increase of 10% on the previous week. We are proud of the success Imran has achieved on Snappy Shopper, whose store’s weekly revenue has remained consistent despite other stores joining the platform in his area.”