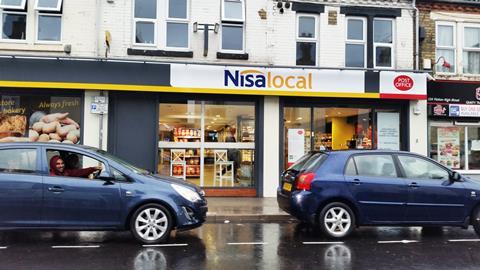 Nisa Fletton started life as a 1,100sq ft c-store with neighbouring post office, before its most recent incarnation saw it transformed into a 3,000sq ft store with deli and post office. The project cost a whopping £360,000, half spent on building works with the remainder spent on the refit. The work was seriously delayed, with the shop forced to close for 10 weeks, rather than the three weeks planned. But now that the doors are open, owner Sivarajah (Siva) Theivanayagam hopes to raise turnover from £42,000 a week to £70,000 in five months’ time.

The old store had just 3.75m of chillers, whereas the new store boasts 30m, with 2.5m dedicated to fruit and veg, 5m to soft drinks and 7.5m to off licence.

Bäro LED lighting throughout the store swivels so that different areas can be highlighted, while an innovative central bar spreads the light. The off-licence area features black LED spotlights courtesy of CDI lighting.

Not only does the polished concrete floor give the store a real point of difference, it is also easy to clean and cost half the price of tiles, claims Siva.

A £25,000 Daikin system controls all chillers, freezers, air-con and heating via a remote system, regenerating heat from chillers and using it to heat the store.

The store now has room for fresh flowers, supplied by Nisa. These are displayed in wooden crates sourced from Nisa after Siva spotted them at the symbol’s annual retail exhibition in Stoneleigh.

An extended range of meats means that popular local suppliers such as Grasmere Farm have been given more space.

Before, the store had just 1m of chilled and 1m of ambient fruit and veg; now it has 3m of ambient and 2.5m chilled.

The store has also added an external ATM.

At 6m long, the new deli counter is twice the size of the old counter, with separate units for cooked meats, cheeses, hot food and sandwiches.

There is now space in the kitchen for staff to prepare sandwiches for Siva’s additional three stores, as well as Nisa Fletton.

The deli produce has a 45% margin, while sandwiches demand 50%.

The counter requires four staff to run it in the morning and two in the afternoon. It is one of only three in the UK carrying Aryzta Food Solutions’ Pierre branding.

Digital screens behind the counter add to the premium finish and highlight the latest deals.

Siva is in talks with a local curry house to supply branded dishes for the counter.

A Seattle’s Best Coffee station (a Starbucks-owned brand) is located at the entrance to the store.

This is accompanied by Cuisine de France pastries and Otis Spunkmeyer cookies and muffins from Aryzta Food Solutions.

The store also has a small seating area to encourage food-to-go sales.

The store boasts a strong Polish fixture to meet the demands of its diverse customer base.

There is also a big Italian community in the neighbourhood, so the store uses three different Italian suppliers for bread, pastries and cheeses.