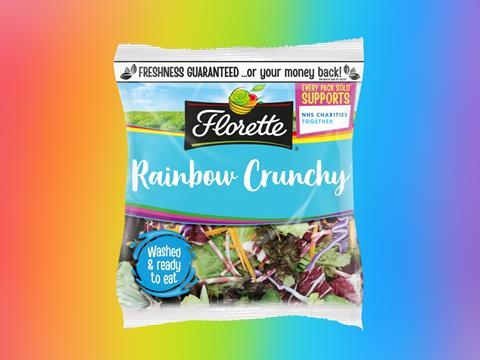 Florette has added a new bagged salad to its range offering a colourful new experience.

Rainbow Crunchy is a colourful crunchy assortment of mild leaves, including escarole and radicchio and vibrant crunchy vegetables such as carrot and candy striped beetroot.

The NPD will be supported by a £1m marketing investment, including ATL, shopper marketing, in-store activation and a digital campaign enhancing visibility, alongside social media and on-pack recipes to inspire shoppers.

Head of marketing at Florette UK Hazel Clark said: “Even the most enthusiastic salad eaters get stuck in a rut on occasion and make do with basic salads, which, whilst nice enough, aren’t exciting. They need help and inspiration to create food that they will love to eat.

“Our in-house chefs have developed recipes to perfectly pair with the salad, which will feature at the heart of our new marketing campaign.”

The new product will launch with a charitable on-pack partnership, with Florette pledging a 2p donation to NHS Charities Together for every pack sold.

The partnership follows Florette’s previous collaboration with Diabetes UK that raised over £61,000 to support the charity’s invaluable work.