Quorn targets back to school trade with new campaign 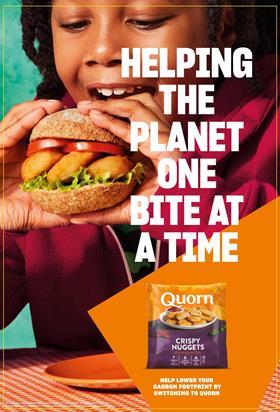 Quorn Foods is tapping into the Back to School period with a multi-channel marketing push, including a brand new TV ad, on screens from 23rd August.

The campaign, which is set to reach over 22m shoppers, will continue throughout September and October with Quorn Nuggets as the hero SKU. The campaign focuses on ‘taste-imonials’, in-store activation, targeted social media and experiential activity to drive sales and increase brand awareness.

“We know great tasting food is key to encouraging people to try meat free and we believe we have the best-tasting meat free nuggets on the market,” says Gill Riley, marketing director at Quorn Foods UK. “Our Crispy Nuggets have always been a shopper favourite, having been purchased more than 1.4m times over the past year [Kantar weighted shoppers, 52 w/e 13.06.21]. Plus, our brand new Quorn Roarsomes, the biggest frozen NPD launch of the year, has delivered over half a million pounds in value sales just three months after launching [Combined Retailer Epos Data to 11th July 2021].”

The brand’s 30” TV spot will be on screens for from the end of August and uses a fun, light-hearted narrative designed to encourage people to think more about their protein choices. The new advert involves a Venus Fly Trap, a muscle man eating a Quorn Burger and, the latest addition for Back to School, a cave woman toasting Quorn Nuggets over a roaring fire.

As well as being low in saturated fat and a source of fibre and protein, the firm claims that Quorn Nuggets’ Carbon Footprint is at least 29% lower than its meat equivalent.

This latest activity forms part of Quorn’s Helping the Planet One Bite at a Time campaign, which aims to showcase tasty meat free swaps everyone can easily make using Quorn. This also drives the company’s wider ambition to become a net positive business by 2030 and, in that year, serve 8 billion meals – that’ll be the equivalent of one for every person on the planet.

First launched in January, the new ad campaign helped gain Quorn third spot for brands which have made the most positive impact in the minds of UK consumers, in March this year (YouGov UK Top 5 biggest movers: March 2021).