Meal and snack manufacturer Symington’s is introducing three new ranges for its Mug Shot portfolio, alongside a host of enhancements for its existing line-up 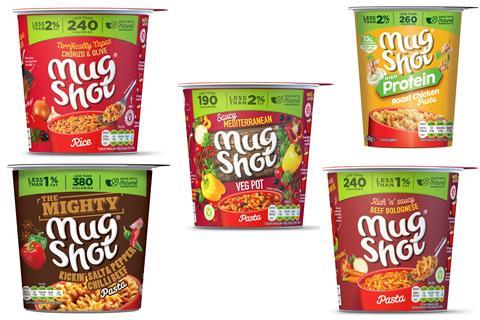 The second new range is Mug Shot vegetable pots. Suitable for vegetarians and made with 50:50 pasta (wholemeal/regular), the products also have an rrp of £1.29 each.

The vegetable-based products are high in fibre, low in fat, contain less than 250 calories and also come in four variants: Mediterranean, Thai, Mexican and Indian.

Finally, Symington’s is launching a new range of on the go rice pots, which take five minutes to prepare and use rice as the main carbohydrate source.

The rice pots (rrp 95p) also contain less than 2% fat and fewer than 250 calories. Available in four flavours: jalfrezi, chorizo & olive, Mexican and korma, the products are a source of fibre and feature an all-natural ingredients list. All new additions to the Mug Shot range come in a 68g pot format.

Kevin Butterworth, marketing director at Symington’s, said: “We’ve enjoyed great success with Mug Shot in the last couple of years, so we’re continuing to invest in the brand as we know it has the potential to grow even further. We spent a great deal of time interrogating insights we’ve received from customers and consumers when it came to developing the new Mug Shot products, and we’re pleased with what we’ve managed to achieve with both the new SKUs and the work we’ve done on nutrition.

“Mug Shot is now the category leader from a nutritional perspective, and we feel that this fact coupled with additional consumers the new products will win puts the brand in in a strong position as we move into June.”

In addition to the new launches, Symington’s is also revamping its existing Mug Shot on the go range and changing the name of its ‘the big one’ sub-brand to ‘the mighty’.

The updated on the go line-up (rrp 95p) is available now in 68g pots and use less fat and salt than before. New flavours: cheese & broccoli pasta and chicken tikka, have also been added to the range alongside a new look to improve visibility on shelf.