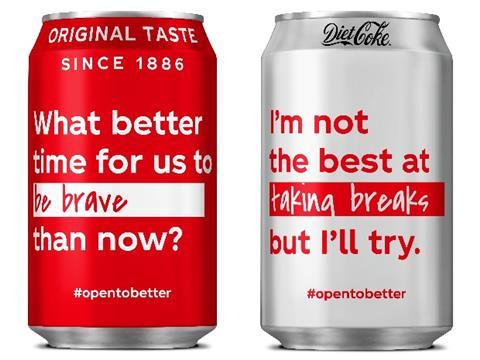 Coca-Cola has announced the launch of the new ‘Open To Better’ campaign.

Designed to inspire people to embrace change and pledge to do things differently in 2021, the campaign sees the launch of new packs which feature a series of inspiring resolutions to encourage consumers to reflect on 2020 and look ahead to how we can be ‘Open To Better’ in 2021.

Running on limited-edition packs of Coca-Cola Original Taste, Coca-Cola zero sugar and Diet Coke, each pack will offer fans a chance to share positive and inspiring messages with friends and family. Plus, in addition to buying packs in-store, people will also be given the unique opportunity to purchase a personalised can via a new online-store in Great Britain from January.

Lending their support to the campaign are Premier League ambassadors Marcus Rashford MBE and Alex Scott MBE as well as Laura Whitmore and AJ & Curtis Pritchard.

Marketing manager at Coca-Cola Great Britain Bryony Lester said: “For more than 136 years, Coca-Cola has used its voice to help unite people across the world. We have launched the ‘Open’ platform, a campaign highlighting how the world has changed and to appreciate what perhaps was previously taken for granted.

“In 2021, our ambition is to be ‘Open To Better’ and use the power of our packaging to share resolutions of hope and positivity that we hope fans will enjoy sharing with their friends and family.”

Limited-edition packs will be available to purchase in-store whilst stocks last, as well as via the following platform www.coke.co.uk/opentobetter